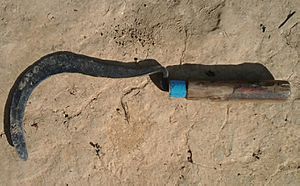 A sickle is a curved cutting tool used in agriculture for harvesting grain crops. It is a hand tool and was used before machines for harvesting. It has a curved blade with an attached handle. The inside part of the curve is sharp, so the user can swing the blade against the crop's base, catching it in the curve and slicing it. Some sickles have a serrated blade like a saw.

A sickle is sometimes used as a weapon. In Greek mythology, Cronus and Perseus did this.

A sickle and a hammer are the symbols of the Soviet Union.

All content from Kiddle encyclopedia articles (including the article images and facts) can be freely used under Attribution-ShareAlike license, unless stated otherwise. Cite this article:
Sickle Facts for Kids. Kiddle Encyclopedia.