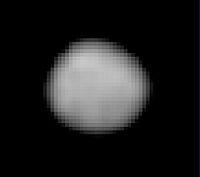 An ultraviolet image of Pallas

2 Pallas is the second asteroid discovered in the solar system. It was discovered by Heinrich Wilhelm Matthäus Olbers on March 28, 1802. 2 Pallas is named after Pallas Athena, an alternate name for the goddess Athena.

All content from Kiddle encyclopedia articles (including the article images and facts) can be freely used under Attribution-ShareAlike license, unless stated otherwise. Cite this article:
2 Pallas Facts for Kids. Kiddle Encyclopedia.