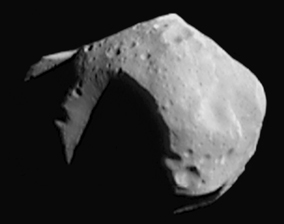 A photo of asteroid (253) Mathilde taken by NEAR

An asteroid is a space rock. It is a small object in the Solar System that travels around the Sun. It is like a planet but smaller. They range from very small (smaller than a car) to 600 miles (1000 km) across. A few asteroids have asteroid moon.

The name "asteroid" means "like a star" in the ancient Greek language. Asteroids may look like small stars in the sky, but they really do move around the Sun, while stars only seem to move because the Earth spins. Like planets, asteroids do not make their own light. Because of this, some people think "asteroids" is not a good name, and think that the name "planetoid" ("like a planet") would be a better name.

Giuseppe Piazzi found the first asteroid, in 1801. He called it Ceres, and it is the biggest object in the asteroid belt. Others, like Juno, Pallas, and Vesta were found later. In the 1850s so many had been found, that they were numbered by a Minor planet designation starting with 1 Ceres. Today, astronomers using computerized telescopes find thousands of asteroids every month. Asteroid impact prediction is one of the purposes.

Asteroids are the leftover rock and other material from the formation of the Solar System. These rocks were too small to come together to make a planet. Some are made of carbon or metal. Depending on what's on the surface, they are classified into various asteroid spectral types including Type M (metal), Type S (stone), and Type C (carbon).

Most asteroids in our Solar System are in the asteroid belt between Mars and Jupiter. Many are not in the main asteroid belt. The ones that come close to Earth are called Near-Earth asteroids. Many scientists think asteroids striking the Earth killed off all the dinosaurs and caused some of the other extinction events.

All content from Kiddle encyclopedia articles (including the article images and facts) can be freely used under Attribution-ShareAlike license, unless stated otherwise. Cite this article:
Asteroid Facts for Kids. Kiddle Encyclopedia.