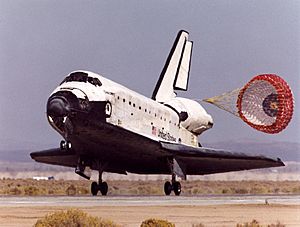 NASA's Space Shuttle is an example of a spacecraft

A spacecraft is a vehicle that can carry people and cargo beyond the Earth's atmosphere, through space to other planetary bodies, space stations, or orbits and back home again. Spacecraft which are launched from the surface of a planet are called launch vehicles and usually take-off from launch pads at spaceports.

Most spacecraft today are propelled by rocket engines, which shoot hot gases opposite to the direction of travel. Other forms of propulsion are used when appropriate. Spacecraft which do not need to escape from strong gravity may use ion thrusters or other more efficient methods.

Because of the very large amount of energy needed to leave the Earth's gravity, spacecraft are usually very expensive to build, launch, and operate. Plans for future spacecraft often focus on reducing these costs so more people can participate in space. But today, costs are still very high, and until recently all spacecraft were sponsored by national governments.

All content from Kiddle encyclopedia articles (including the article images and facts) can be freely used under Attribution-ShareAlike license, unless stated otherwise. Cite this article:
Spacecraft Facts for Kids. Kiddle Encyclopedia.