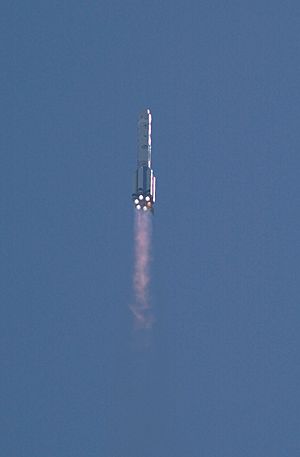 Spaceflight is when a thing (spacecraft) made by man flies into outer space. A spaceflight can happen with or without humans on board. The Russian Soyuz program, the US Space Shuttle and the International Space Station are examples of manned (with humans) missions for spaceflight. Space probes and satellites (which orbit the Earth), are examples of unmanned (without humans) spaceflights. These operate either by radio control or are fully independent.

Spaceflight is used for space exploration such as manned missions to the Earth's moon or unmanned missions to other planets in the solar system. Spaceflight can also be used for tourism and satellite telecommunications. A spaceflight begins with a rocket launch, which provides enough energy to get out of Earth's atmosphere and to orbit the Earth. Once the rocket is in space, the activity of the rocket is watched and studied by scientists back on Earth. Some rockets may remain in space forever, some break apart when they reenter Earth's atmosphere. A few land or fall on other planets.

A German V-2 missile crossed the Kármán line (100 km or 62 miles above the Earth) on October 3, 1942. This was the first spaceflight. The first artificial satellite of Earth was the Russian Sputnik 1 on October 4, 1957.

All content from Kiddle encyclopedia articles (including the article images and facts) can be freely used under Attribution-ShareAlike license, unless stated otherwise. Cite this article:
Spaceflight Facts for Kids. Kiddle Encyclopedia.