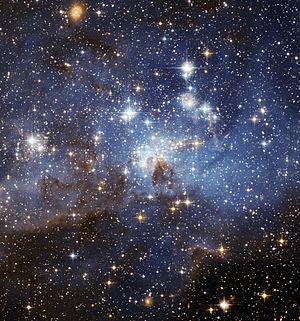 Space, also known as outer space, is the near-vacuum between celestial bodies.it is a hard vacuum containing a low density of particles, predominantly a plasma of hydrogen and helium, as well as electromagnetic radiation, magnetic fields, neutrinos, dust, and cosmic rays. It is where everything (all of the planets, stars, galaxies and other objects) is found.

On Earth, space begins at the Kármán line (100 km above sea level). This is where Earth's atmosphere is said to stop and outer space begins. This is not a natural boundary but is a convention used by scientists and diplomats.

However, the space near Earth is quite crowded by astronomical standards. A list of spaces goes like this:

Exploring space is very difficult because it contains no air and is so large that even the fastest ships can only explore a tiny part of it. It takes 3 days of traveling to reach the Moon and, depending on speed, it would take a long time to reach the closest star Proxima Centauri.

Manned spacecraft are designed to keep good air inside them and to protect astronauts from extreme temperatures.

We gain most of our information about the items in space from different kinds of telescopes. Some of them are space telescopes, put in outer space for a better view. Space probes also explore planets, comets and other space objects that are not too far.

All content from Kiddle encyclopedia articles (including the article images and facts) can be freely used under Attribution-ShareAlike license, unless stated otherwise. Cite this article:
Outer space Facts for Kids. Kiddle Encyclopedia.