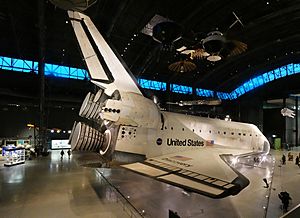 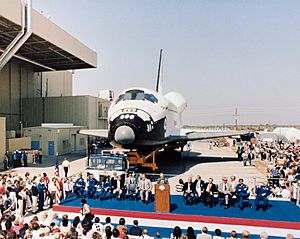 Space Shuttle Discovery (Orbiter Vehicle Designation: OV-103) is one of the orbiters from NASA's Space Shuttle program and the third of five fully operational orbiters to be built. Its first mission, STS-41-D, flew from August 30 to September 5, 1984. Over 27 years of service it launched and landed 39 times, gathering more spaceflights than any other spacecraft to date. Like other shuttles, the shuttle has three main components: the Space Shuttle orbiter, a central fuel tank, and two rocket boosters. Nearly 25,000 heat resistant tiles cover the orbiter to protect it from high temperatures on re-entry.

Discovery became the third operational orbiter to enter service, preceded by Columbia and Challenger. It embarked on its last mission, STS-133, on February 24, 2011 and touched down for the final time at Kennedy Space Center on March 9, having spent a cumulative total of almost a full year in space. Discovery performed both research and International Space Station (ISS) assembly missions, and also carried the Hubble Space Telescope into orbit.

Discovery was the first operational shuttle to be retired, followed by Endeavour and then Atlantis. The shuttle is now on display at the Steven F. Udvar-Hazy Center in Virginia.

All content from Kiddle encyclopedia articles (including the article images and facts) can be freely used under Attribution-ShareAlike license, unless stated otherwise. Cite this article:
Space Shuttle Discovery Facts for Kids. Kiddle Encyclopedia.