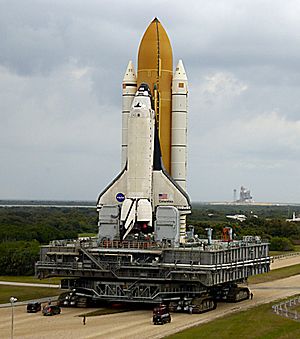 The Space Shuttle Columbia (OV-102)was a spacecraft used by NASA to fly into outer space. It was the first Space Shuttle to fly into space, on April 12, 1981. It broke apart while re-entering the Earth's atmosphere on February 1, 2003, killing all seven people who were on it at the time. The shuttle flew a total of 28 missions. The Columbia was named after a US Navy ship that circumnavigated the world in 1836. It was also the name of the Apollo 11 Lunar Excursion Module.

A piece of insulating foam from the external fuel tank peeled off during the launch 16 days earlier and struck the shuttle's left wing.

A hole was punctured in the leading edge of the wing. During the intense heat of re-entry, hot gases entered the interior of the wing, destroying the support structures and causing the rest of the shuttle to break apart. 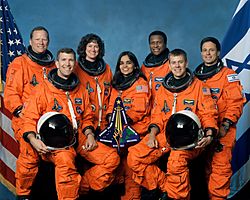 All content from Kiddle encyclopedia articles (including the article images and facts) can be freely used under Attribution-ShareAlike license, unless stated otherwise. Cite this article:
Space Shuttle Columbia Facts for Kids. Kiddle Encyclopedia.