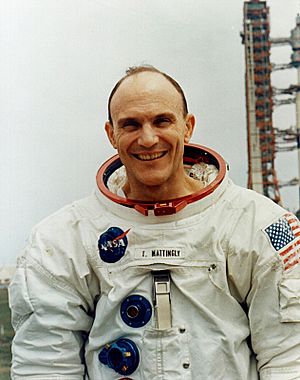 Mattingly poses at the launch pad

Mattingly had been scheduled to fly on Apollo 13, but three days prior to launch, he was held back and removed from the mission due to exposure to German measles (which he did not contract).

Born March 17, 1936, in Chicago, Illinois, Mattingly attended school in Hialeah, Florida, and was active in the Boy Scouts of America where he achieved its second highest rank, Life Scout. He graduated from Miami Edison High School in 1954, and went on to receive a Bachelor of Science degree in Aeronautical Engineering from Auburn University in 1958.

He joined the U.S. Navy as an Ensign in 1958 and received his aviator wings in 1960. He was then assigned to Attack Squadron Thirty-five (VA-35) at NAS Oceana, Virginia and flew A-1H Skyraider aircraft aboard the aircraft carrier USS Saratoga from 1960 to 1963. In July 1963, he served in Heavy Attack Squadron Eleven (VAH-11) at NAS Sanford, Florida, where he flew the A-3B Skywarrior aircraft for two years and deployed aboard USS Franklin D. Roosevelt.

In 1970, he married Elizabeth Ellen Dailey.

He has logged 7,200 hours of flight time—which includes 5,000 hours in jet aircraft.

Mattingly was a student at the Air Force Aerospace Research Pilot School at Edwards AFB, California when NASA selected him as an astronaut in April 1966. 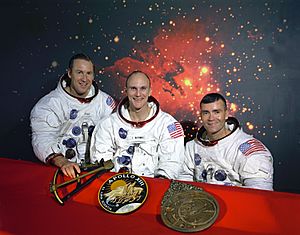 At first, Mattingly was part of the support crew for Apollo 8, and then trained parallel with Bill Anders for Apollo 11 as backup Command Module Pilot. Mattingly's first prime assignment was to be the Command Module Pilot on the Apollo 13 mission. Three days prior to launch, he was removed from the mission due to exposure to German measles (which he never contracted) and was replaced by the backup CM pilot, Jack Swigert. As a result, he missed the dramatic in-flight explosion that crippled the spacecraft. However, Mattingly was involved in helping the crew solve the problem of power conservation during re-entry. 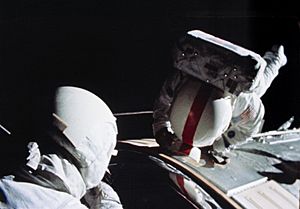 The mission assigned to Apollo 16 was to collect samples from the lunar highlands near the crater Descartes. While in lunar orbit the scientific instruments aboard the Command/Service Module Casper extended the photographic and geochemical mapping of a belt around the lunar equator. Twenty-six separate scientific experiments were conducted both in lunar orbit and during cislunar coast (between the earth and the moon). Major emphasis was placed on using man as an orbital observer, capitalizing on the human eye's unique capabilities and man's inherent curiosity.

During the return leg of the mission, Mattingly carried out an extravehicular activity (EVA) to retrieve film and data packages from the science bay on the side of the service module. Although the mission of Apollo 16 was terminated one day early, due to concern over several spacecraft malfunctions, all major objectives were accomplished through the ceaseless efforts of the mission support team and were made possible by the most rigorous pre-flight planning yet associated with an Apollo mission. 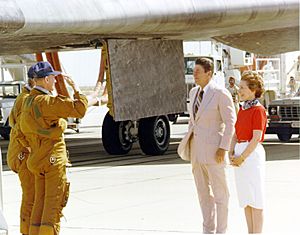 Mattingly was named to command STS-4, the fourth and final orbital test flight of the Space Shuttle Columbia, launched from Kennedy Space Center, Florida, on June 27, 1982 with Henry W. Hartsfield Jr., as the pilot. This 7-day mission was designed to further verify ascent and entry phases of shuttle missions; perform continued studies of the effects of long-term thermal extremes on the orbiter subsystems; and conduct a survey of orbiter-induced contamination on the orbiter payload bay. 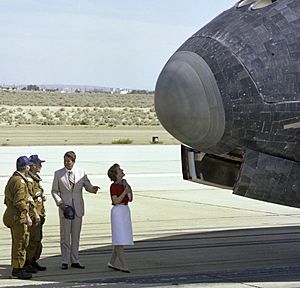 Additionally, the crew operated several scientific experiments located in the orbiter's cabin and in the payload bay. The crew is also credited with effecting an in-flight repair which enabled them to activate the first operational "Getaway Special" (composed of nine experiments that ranged from algae and duckweed growth in space to fruit fly and brine shrimp genetic studies).

STS-4 completed 112 orbits of the Earth before landing on a concrete runway at Edwards Air Force Base, California, on July 4, 1982. Mattingly and Hartsfield were greeted by President Ronald Reagan after the landing; Reagan recognized the pair, both graduates of Auburn University, as "you two sons of Auburn" in his welcoming speech. 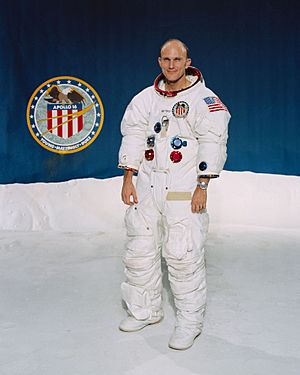 In 1985, Mattingly retired from NASA and retired from the Navy in 1986 with the two-star rank of Rear admiral (upper half), and entered the private sector. He worked as a Director in Grumman's Space Station Support Division. He then headed the Atlas booster program for General Dynamics in San Diego, California. At Lockheed Martin he was Vice President in charge of the X-33 development program. He is currently working at Systems Planning and Analysis in Virginia.

He was one of 24 Apollo astronauts who were inducted into the U.S. Astronaut Hall of Fame in 1997.

All content from Kiddle encyclopedia articles (including the article images and facts) can be freely used under Attribution-ShareAlike license, unless stated otherwise. Cite this article:
Ken Mattingly Facts for Kids. Kiddle Encyclopedia.