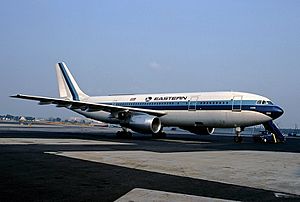 An Eastern Airbus A300 airplane.

In 2015, Eastern relaunched flights. The company merged with Swift Air in 2017 stating that, "the transaction is not a purchase of one certificate or merger of two certificates." Eastern's last flight was in September of 2017. Swift completed its asset purchase and all remaining Eastern aircraft were transferred to the Swift certificate. In September 2017 Eastern surrendered its certificate to the FAA. The Eastern name will be transferred to Dynamic International Airways, an airline co-owned by Swift ownership.

All content from Kiddle encyclopedia articles (including the article images and facts) can be freely used under Attribution-ShareAlike license, unless stated otherwise. Cite this article:
Eastern Air Lines Facts for Kids. Kiddle Encyclopedia.