Edward Vernon Rickenbacker (October 8, 1890 – July 23, 1973) was an American fighter ace in World War I. He was also a Medal of Honor recipient. With 26 aerial victories he was America's most successful fighter ace in the war. He was also a race car driver and automotive designer. He was a government consultant in military matters and a pioneer in airline transport. He was also the longtime head of Eastern Air Lines. 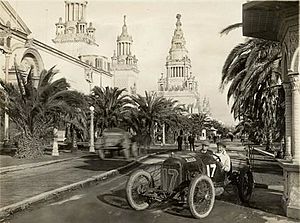 Rickenbacker driving in the 1915 American Grand Prize at San Francisco.

He was born Edward Richenbacher (without a middle name) in Columbus, Ohio. His parents were German-speaking Swiss immigrants. Since childhood he loved machines and experimented with them. He was encouraged by his father's words: "A machine has to have a purpose".

Rickenbacker nearly died many times. He had an early run-in with a horse-drawn carriage, a botched tonsillectomy and multiple airplane crashes. His first near death experience occurred when he was in the "Horsehead Gang". He lived near a mine and they decided to ride a cart down the slope. It tipped over and almost crushed them.

He stopped going to school in grade seven after the accidental death of his father on August 26, 1904. Rickenbacker found jobs to help support the family. Driven by an intense admiration for machines he taught himself as much as he could. This included enrolling in a correspondence course in engineering. He aggressively pursued any chance of involvement with automobiles. Rickenbacker went to work at the Columbus Buggy Company. He eventually becoming a salesman.

Rickenbacker became well known as a race car driver. He competed in the Indianapolis 500 four times before World War I. He earned the nickname "Fast Eddie". He joined the Maxwell Race Team in 1915 after leaving Peugeot. After the Maxwell team disbanded that same year, he joined the Prest-O-Lite team as manager and continued to race improved Maxwells for Prest-O-Lite.

He was in the United States Army in 1917 when Congress declared war. Soon he was in France where he became a pilot.

Eddie Rickenbacker in his SPAD S.XIII 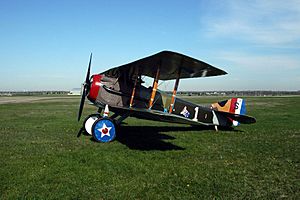 SPAD XIII in the colors of the 94th Aero Squadron. Aircraft is marked as Eddie Rickenbacker's aircraft.

All content from Kiddle encyclopedia articles (including the article images and facts) can be freely used under Attribution-ShareAlike license, unless stated otherwise. Cite this article:
Eddie Rickenbacker Facts for Kids. Kiddle Encyclopedia.