Gulls, also called seagulls, are birds. They form the family Laridae, in the order Charadriiformes.

There are many different types of gull but most of them are white, with grey or black wings, a yellow beak and are about the size of a chicken (but some are smaller). Gulls can eat most types of food but like meat more than anything else. They look around for discarded food and dead animals to eat as well as hunting and have learned how to live and breed in the same places as people. Most types of seagull are awake during the day and sleep at night. They like to sleep on beaches but will also sleep on water, like lakes or the sea when the water is calm.

Gulls used to be found only near the sea, as they are water birds with webbed feet for swimming. They are more common inland these days because they can find food wherever people live, often on garbage dumps or in the streets of towns and cities. Seagulls are intelligent compared to other birds. They have a complicated system of noises and body movements which they use to communicate with other seagulls.

Most types of seagull breed once a year and have two or three chicks (babies). Mother gulls are very protective of their eggs and chicks and will sometimes fight to the death to defend them. 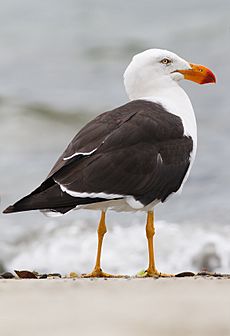 Gull species range in size from the Little Gull, at 120 g (4.2 oz) and 29 cm (11.5 inches), to the Great Black-backed Gull, at 1.75 kg (3.8 lbs) and 76 cm (30 inches). They are generally uniform in shape, with heavy bodies, long wings, moderately long necks . The tails of all but three species are rounded; the exceptions being the Sabine's Gull and Swallow-tailed Gulls, which have forked tails, and the Ross's Gull, which has a wedge-shaped tail. Gulls have moderately long legs (certainly longer than the terns) with fully webbed feet. The bill is generally heavy and slightly hooked, with the larger species having stouter bills than the smaller species. The bill colour is often yellow with a red spot for the larger white-headed species and red, dark red or black in the smaller species.

The gulls are generalist feeders, indeed they are the least specialised of all the seabirds, and their morphology allows for equal adeptness in swimming, flying and walking. They are more adept walking on land than most other seabirds, and the smaller gulls tend to be more manoeuvrable while walking. The walking gait of gulls includes a slight side to side motion, something that can be exaggerated in breeding displays. In the air they are able to hover and they are also able to take off quickly with little space.

The general pattern of plumage in adult gulls is a white body with a darker mantle; the extent to which the mantle is darker varies from pale grey to black. A few species vary in this, the Ivory Gull is entirely white, and some like the Lava Gull and Heermann's Gull have partly or entirely grey bodies. The wingtips of most species are black, which improves their resistance to wear and tear, usually with a diagnostic pattern of white makings. The head of gulls may be covered by a dark hood or be entirely white. The plumage of the head varies by breeding season; in non-breeding dark-hooded gulls the hood is lost, sometimes leaving a single spot behind the eye, and in white-headed gulls non-breeding heads may have streaking. 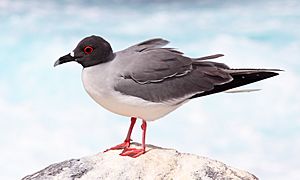 Swallow-tailed Gulls are endemic to the Galapagos Islands

The gulls have a worldwide cosmopolitan distribution. They breed on every continent, including the margins of Antarctica, and are found in the high Arctic as well. They are less common on tropical islands, although a few species do live on islands such as the Galapagos and New Caledonia. Many species breed in costal colonies, with a preference for islands, and one species, the Grey Gull, breeds in the interior of dry deserts far from water. There is considerable variety in the family and species may breed and feed in marine, freshwater or terrestrial habitats.

Most gull species are migratory, with birds moving to warmer habitats during the winter, but the extent to which they migrate varies by species. Some species migrate long distances, like the Franklin's Gull, which migrates from Canada to wintering grounds in the south of South America. Other species move much shorter distances and may simply disperse along the coasts near their breeding sites.

Charadriiform birds drink salt water as well as fresh water, as they possess exocrine glands located in supraorbital grooves of the skull by which sodium chloride can be excreted through the nostrils to assist the kidneys in maintaining electrolyte balance.

Gulls are highly adaptable feeders that opportunistically take a wide range of prey. The food taken by gulls includes fish and marine and freshwater invertebrates, both alive and already dead, terrestrial arthropods and invertebrates such as insects and earthworms, rodents, eggs, carrion, offal, reptiles, amphibians, plant items such as seeds and fruit, human refuse, and even other birds. No gull species is a single-prey specialist, and no gull species forages using only a single method. The type of food depends on circumstances, and terrestrial prey such as seeds, fruit and earthworms are more common during the breeding season while marine prey is more common in the non-breeding season when birds spend more time on large bodies of water. 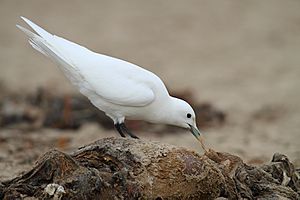 In addition to taking a wide range prey items gulls display great versatility in how they obtain prey. Prey can be obtained in the air, on water or on land. In the air a number of hooded species are able to hawk insects on the wing; larger species perform this feat more rarely. Gulls on the wing will also snatch items both off water and off the ground, and over water they will also plunge-dive to catch prey. Again smaller species are more manoeuvrable and better able to hover-dip fish from the air. Dipping is also common when birds are sitting on the water, and gulls may swim in tight circles or foot paddle to bring marine invertebrates up to the surface. Food is also obtained by searching the ground, often on the shore among sand, mud or rocks. Larger gulls tend to do more feeding in this way. In shallow water gulls may also engage in foot paddling. A unique method of obtaining prey to gulls involves dropping heavy shells of clams and mussels onto hard surfaces. Gulls may fly some distance in order to find a suitable surface on which to drop shells, and there is apparently a learnt component to the task as older birds are more successful than younger ones. While overall feeding success is a function of age, the diversity in both prey and feeding methods is not. It has been suggested that the time taken to learn foraging skills explains the delayed maturation in gulls.

Gulls have only a limited ability to dive below the water in order to feed on deeper prey. In order to obtain prey from deeper down many species of gull feed in association with other animals, where marine hunters drive prey to the surface when hunting. Examples of such associations include four species of gull feeding around plumes of mud brought to the surface by feeding Grey Whales, and also between Orcas(largest dolphin specie)and Kelp Gulls (and other seabirds). 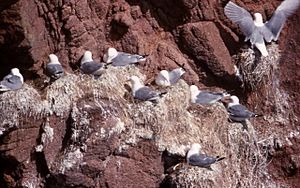 Gulls are monogamous and colonial breeders that display mate fidelity that usually lasts for the life of the pair. Divorce of mated pairs does occur, but it apparently has a social cost that persists for a number of years after the break up. Gulls also display high levels of site fidelity, returning to the same colony after breeding there once and even usually breeding in the same location within that colony. Colonies can vary from just a few pairs to over a hundred thousand pairs, and may be exclusive to that gull species or shared with other seabird species. A few species nest singly, and single pairs of Band-tailed Gulls may breed in colonies of other birds. Within colonies gull pairs are territorial, defending an area of varying size around the nesting site from others of their species. This area can be as large as a 5 m radius around the nest in the Herring Gull to just a tiny area of cliff ledge in the kittiwakes.

Most gulls breed once a year and have predictable breeding seasons lasting for three to five months. Gulls begin to assemble around the colony for a few weeks prior to occupying the colony. Existing pairs re-establish their pair-bonds, and unpaired birds begin courting. Birds then move back into their territories and new males establish new territories and attempt to court females. Gulls defend their territories from rivals of both sexes through calls and aerial attacks. 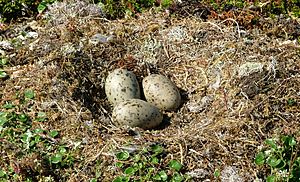 The nest of a Greater Black-backed Gull, with three typical eggs

Nest building is also part of the pair-bonding. Gull nests are usually mats of herbaceous matter with a central nest cup. Nests are usually built on the ground, but a few species build nests on cliffs, including the kittiwakes which almost always nest in such habitats, and in some cases in trees, like Bonaparte's Gulls. Species that nest in marshes must construct a nesting platform in order to keep the nest dry, particularly in species that nest in tidal marshes. Both sexes gather nesting material and build the nest, but the division of labour isn't always exactly equal.

Clutch size is typically three eggs, although it is two in some of the smaller species and only one egg for the Swallow-tailed Gull. Within colonies birds will synchronise their laying, with synchronisation being higher in larger colonies, although after a certain level this levels off. The eggs of gulls are usually dark tan to brown or dark olive with dark splotches and scrawl markings, and are well camouflaged. Both sexes incubate the eggs, with incubation bouts lasting between one and four hours during the day and one parent incubating through the night.

Incubation lasts between 22 and 26 days, and begins after laying the first egg, although it is discontinuous until the second egg is laid. This means the first two chicks are born close together, and the third chick some time later. Young chicks are brooded by their parents for about one or two weeks, and are often at least one parent will remain with them until they fledge in order to guard them. Both parents feed the chicks, although early on in the rearing period the male does most of the feeding and the female most of the brooding and guarding.

All content from Kiddle encyclopedia articles (including the article images and facts) can be freely used under Attribution-ShareAlike license, unless stated otherwise. Cite this article:
Gull Facts for Kids. Kiddle Encyclopedia.