The silver gull (Chroicocephalus novaehollandiae or Larus novaehollandiae) is the most common gull of Australia. It has been found throughout the continent, but particularly at or near coastal areas. It is smaller than the Pacific gull (Larus pacificus), which also lives in Australia.

The silver gull should not be confused with the herring gull, which is called "silver gull" in many other languages (scientific name Larus argentatus, German Silbermöwe, French Goéland argenté, Dutch zilvermeeuw), but is a much larger, robust gull with no overlap in range.

It has traditionally been placed in the genus Larus, as is the case with many gulls, but is now placed in the genus Chroicocephalus. Hartlaub's gull (C. hartlaubii) of South Africa was formerly sometimes considered to be subspecies of the silver gull. 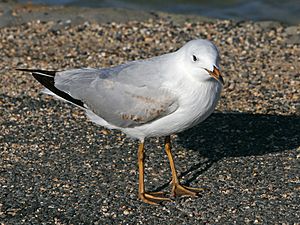 The head, body, and tail are white. The wings are light grey with white-spotted, black tips. Adults range from 40–45 cm in length. Mean wingspan is 94 cm. Juveniles have brown patterns on their wings, and a dark beak. Adults have bright red beaks—the brighter the red, the older the bird.

Silver gulls are found in all states of Australia, as well as New Zealand and New Caledonia. It is a common species, having adapted well to urban environments and thriving around shopping centres and garbage dumps. Their successful adaption to urban habitats have seen their population increase in areas of human activity, with the availability of nesting grounds the only limiting factor on population growth.

Silver gulls have twice been recorded in the United States; one bird was shot in August 1947 at the mouth of the Genesee River, Lake Ontario, and another was photographed in Salem County, New Jersey, in autumn 1996. Both are believed to have escaped from captivity. 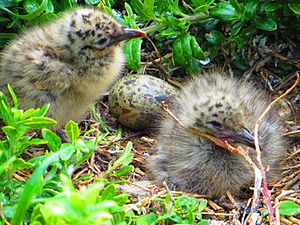 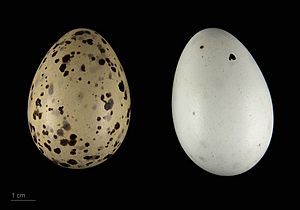 The silver gull has a sharp voice consisting of a variety of calls. The most common call is a harsh, high pitched 'kwarwh'.

The silver gull naturally feeds on worms, fish, insects and crustaceans. It is a successful scavenger, allowing increased numbers near human settlements.

Breeding occurs from August to December, typically in large colonies on offshore islands. The nest is located on the ground and consists of seaweed, roots, and plant stems. The nests may be found in low shrubs, rocks and jetties. Typical clutch size is one to three eggs. Often two broods are raised in a year, and both adults share nest-building, incubation and feeding.

All content from Kiddle encyclopedia articles (including the article images and facts) can be freely used under Attribution-ShareAlike license, unless stated otherwise. Cite this article:
Silver gull Facts for Kids. Kiddle Encyclopedia.