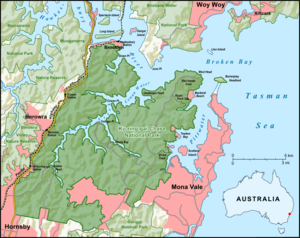 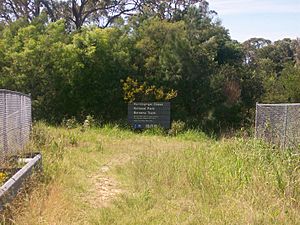 The Ku-ring-gai Chase National Park is a protected national park that is located in New South Wales, Australia. The 14,977-hectare (37,010-acre) national park is situated 25 kilometres (16 mi) north of Sydney located largely within the Ku-ring-gai, Hornsby, Warringah and Pittwater local government areas. The villages of Cottage Point, Appletree Bay, and Bobbin Head are located within park boundaries. An isolated portion of the park; Barrenjoey Headland, is located to the north of Palm Beach east of the primary park body and is home to Barrenjoey Lighthouse.

Ku-ring-gai Chase is also officially classed as a suburb by the Geographical Names Board of New South Wales.

Ku-ring-gai is generally regarded as a popular tourist destination, known for its scenic setting on the edge of a southern branch of the Hawkesbury River as well as rock engravings and other art of Aboriginal origin. Picnic, boating, and fishing facilities can be found throughout the park. There are many great walking tracks in Ku-ring-gai, especially through the Duffys Forest and Terrey Hills area. 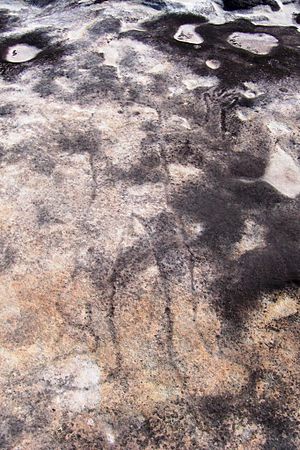 The first inhabitants of the area were the indigenous Garigal people. The rugged landscape provided abundant food and adequate shelter for the aboriginals. More than 800 Aboriginal sites have been found in the park. These include rock engravings, cave drawings, paintings and stencils, axe grinding grooves and middens.

The park was first declared in 1894. The television series, Skippy the Bush Kangaroo was shot in northern Sydney at Ku-ring-gai Chase National Park and the adjacent Waratah Park. Bushfires ravaged the park in January 1994.

Many of the park's attractions are accessible only by walking track. Many kilometres of park front the southern shoreline of Broken Bay making it a good place to explore by boat.

Rail access is provided at Mount Colah, Mount Kuring-gai, Berowra and Cowan railway stations. All roads in the area are sealed and all have collection gates where a daily fee is payable.

Bobbin Head is located on Cowan Creek and facilities include a marina, picnic areas, a small store, and a lunch-time restaurant in what used to be the Bobbin Head Inn, which also contains an information centre. The area contains many fire trails and a walk through mangroves. Aboriginal engravings can be seen in the area.

A popular camping and picnic site with a small beach is located at the Basin on Pittwater. This is the only place in the entire national park where camping is allowed. Access is either by West Head Road via The Basin Track or on a ferry from Palm Beach Wharf.

West Head is a headland at the north eastern tip of the National Park. A lookout, with views of Barrenjoey, Palm Beach and Broken Bay, has been built on West Head. The Flint & Steel Guesthouse was one of the first buildings on West Head.

The view from West Head Lookout over to Barrenjoey.

Barrenjoey is a locality of Palm Beach. It is a headland and unusual amongst the National Park's features as it is not joined to the rest of the Park by land but separated by 1 kilometer of water, the Pittwater. 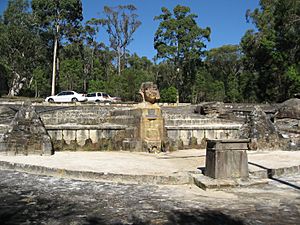 This is a walk going by the Sphinx Memorial commemorating the fallen A.I.F comrades of Pte. W. T. Shirley during World War I.

Cottage Point Kiosk and Boat Hire, built around 1918, is situated at Cottage Point at the entrance to Coal and Candle Creek.

Jerusalem Bay is accessible by a track which is part of the Great North Walk from Cowan railway station next to the Pacific Highway. The track passes through a creek gorge lined with temperate rainforest and large turpentines before opening to the bay. At the bay is an old abandoned habitation site. It opens out to Cowan Water and Broken Bay making it popular with boating and fishing enthusiasts. After the bay the track proceeds up a steep climb past Campbell's Crater and along the ridge all the way to Brooklyn. Campbell's Crater is a volcanic diatreme containing subtropical rainforest species such as Red Cedars and Cabbage Palms with a floor of ferns.

All content from Kiddle encyclopedia articles (including the article images and facts) can be freely used under Attribution-ShareAlike license, unless stated otherwise. Cite this article:
Ku-ring-gai Chase National Park Facts for Kids. Kiddle Encyclopedia.