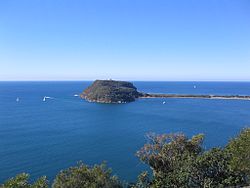 Barrenjoey is a locality in the suburb of Palm Beach, at the most northern tip of Pittwater. The headland is mostly made up of Hawkesbury sandstone which overlays Narrabeen shale. Around 10,000 years ago the headland was cut off from the mainland due to the rising sea level; subsequent buildup of a sand spit or tombolo reconnected the island to the mainland (a 'tied island'). It is the location of the Barrenjoey Head Lighthouse, a lighthouse that was first lit in 1881.

On 2 March 1788, Arthur Phillip named the headland "Barrenjuee" (meaning little kangaroo or wallaby). The name has been spelt differently over time, Barrenjoey now being the accepted name since 1966. 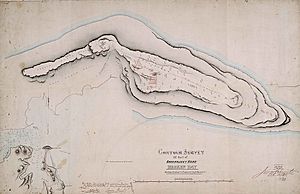 All content from Kiddle encyclopedia articles (including the article images and facts) can be freely used under Attribution-ShareAlike license, unless stated otherwise. Cite this article:
Barrenjoey, New South Wales Facts for Kids. Kiddle Encyclopedia.