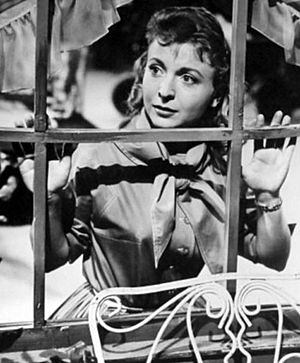 Publicity photo of Rosemary Prinz as Penny Hughes from As the World Turns.

A soap opera is a television or radio program that airs in episodic series. This means that each episode continues telling a story, which, in turn, tells more of the last episode's story. A single story on a soap opera can be told for weeks, months, or sometimes even years.

In America, each soap opera airs every day, Monday through Friday, in the afternoon. Because they air at this time, they are sometimes called daytime serials. In the U.K. and other countries, the soap operas air in the evening, twice or three times a week.

Some examples of American soap operas:

There are still two soaps that air in Australia, Network Ten's Neighbours and the Seven Network's Home and Away. Strangely, Neighbours is more popular in England than it is in Australia.

All content from Kiddle encyclopedia articles (including the article images and facts) can be freely used under Attribution-ShareAlike license, unless stated otherwise. Cite this article:
Soap opera Facts for Kids. Kiddle Encyclopedia.