Kids Encyclopedia Facts
This page is about part of London, United Kingdom. For the city in South Africa, see East London, Eastern Cape. For other uses, see East London (disambiguation). 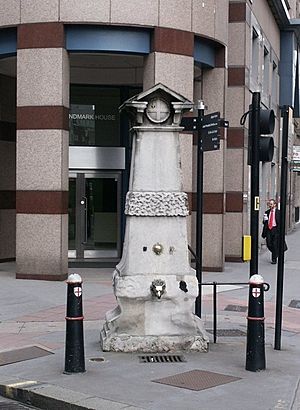 East London is a popularly and informally defined part of London, capital of the United Kingdom, lying east of the ancient City and north of the River Thames.

The East End of London is a subset of East London, consisting of areas close to the ancient City of London.

The Eastern (E) Postal District is a different subset of East London and there is also an "East" sub-region used in the London Plan for planning and progress-reporting purposes. The most recent (2011) iteration includes the seven boroughs north of the Thames with the addition of three boroughs south of the river.

By contrast the extent of East London as a whole can be confidently expressed: lying north of the Thames, stretching from the Roman and Medieval walls of the City to the Metropolitan Green Belt, and covering areas that are traditionally part of Middlesex and Essex.

Aldgate Pump on the edge of the City is a symbolic start of East London – more specifically the East End. Tower Bridge is sometimes also described in these terms.

The boundary with north London runs along Regent's Canal, turns north to follow Kingsland Road and then makes its way to the River Lea, whose channels, marshes and reservoirs form the largest part of the boundary.

This well established, but unofficial, definition takes in six modern London boroughs and most of a seventh, Hackney.

The parts of Hackney within East London are:

The remaining areas of Hackney are usually considered to be part of north London.

As well as extramural parts of the City, East London comprises:

The E (Eastern) postcode area was introduced in 1857 to facilitate the distribution of mail. The postcode area is a sub-set of East London, with notable exclusions: 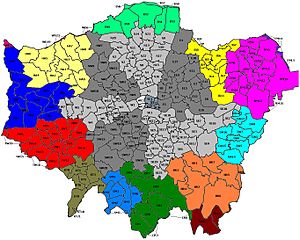 London Postal Region Map: The 'Eastern' district is a sub-set of East London which excludes central areas, Hoxton and the eastern suburbs.

As described, East London comprises 6 whole London Boroughs: Tower Hamlets, Newham, Waltham Forest, Barking and Dagenham, Redbridge, Havering as well as most of the London Borough of Hackney and a small eastern extra-mural fringe of the City of London.

London currently has 73 parliamentary constituencies, of which 12 are fully and 4 partially in East London. It is anticipated that after 2018 London’s total will be reduced to 68 and the East will have a reduction to 11 full and four part constituencies.

The 2011 iteration of the London Plan included an altered ‘East’ region, to be used for planning, engagement, resource allocation and progress reporting purposes. As well as seven boroughs north of the river, the ‘East’ sub-region also includes three boroughs to the south of it: Greenwich, Bexley and Lewisham. 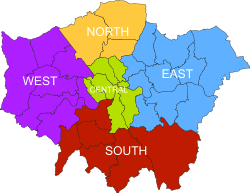 The East End, the old core of modern East London, began with the medieval growth of London beyond the city walls, along the Roman Roads leading from Bishopsgate and Aldgate, and also along the river.

Growth was much slower in the east, and the modest extensions there were separated from the much larger suburbs in the west by the marshy open area of Moorfields adjacent to the wall on the north side, which discouraged development in that direction. Urbanisation accelerated in the 16th century and the area that would later become known as the East End began to take shape.

The first known written record of the East End as a distinct entity, as opposed its component parts, comes from John Strype's 1720 'Survey of London', where he describes London as consisting of four parts: the City of London, Westminster, Southwark, and That Part beyond the Tower.

The westernmost component of the Tower Division was the Ancient Parish of Shoreditch which would become fully urbanised as part of the East End\East London. Shoreditch’s boundary with the parish of St Luke's (and its predecessor St Giles-without-Cripplegate) ran through the Moorfields countryside becoming, on urbanisation, the boundary of east and north London. That line, with very slight modifications, has also become the boundary of the modern London Boroughs of Hackney and Islington.

Moorfields remained largely open until 1812, and the longstanding presence of that open space separating the emerging East End from the western urban expansion of London must have helped shape the varying economic character of the two parts and perceptions of their distinct identity (see map below). 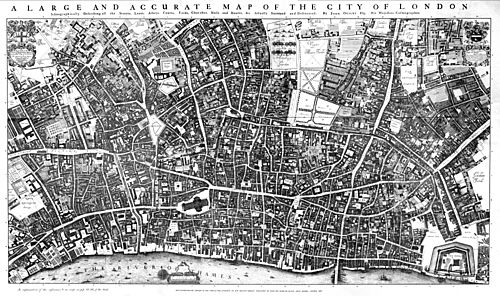 Ogilby & Morgan's 1673 map of London. The East End is developing outside Bishopsgate, Aldgate and along the river - it is separated from the western growth of the city by Moorfields

Until about 1700, London didn't extend far beyond the walled boundaries of the City of London. However, the population in the parishes to the east of the City was rising and this was reflected by the need to break up the large ancient parish of Stepney into smaller units to provide adequate religious and civil administration; and the creation of the Tower division of Middlesex. It was the industries associated with the River Thames that encouraged growth in the east, and by 1650 Shadwell was a developed maritime settlement. The docks in Tower Hamlets started to reach capacity in the early 19th century and in 1855 the Royal Victoria Dock was opened in Newham.

The early development of London eastward was caused by the expansion of industries associated with the River Thames, such as ship building and the docks. Because these industries declined in the later part of the 20th century, East London is now an area of regeneration. In the London Docklands this has reached advanced stages, but in the sections of East London that are within the Thames Gateway it is continuing, such as the redevelopment in Stratford associated with the 2012 Summer Olympics.

Areas further east developed in the Victorian and Edwardian eras following the expansion of the railways in the 19th century. Development of suburban houses for private sale was later matched by the provision of large scale social housing at Becontree in the 1920s and Harold Hill after the Second World War. However, the urban footprint was constrained in 1878 by the protection of Epping Forest and later the implementation of the Metropolitan Green Belt. The density of development increased during the interwar period and new industries developed such as Ford at Dagenham. In Tower Hamlets the population peaked in 1891 and growth was restricted to the outer boroughs. By 1971 the population had peaked in every borough and the entire area was experiencing population decline. By the time of the 2011 census this had reversed and every borough had experienced some growth in population.

The etymology of London is uncertain, but is known to be an ancient name. The concept of East London as a distinct area is a relatively recent innovation. John Strype's map of 1720 describes London as consisting of four parts: The City of London, Westminster, Southwark and "That Part Beyond the Tower". From the late 19th century the term East End of London was used to describe areas immediately adjacent to the City in the Tower division of Middlesex. Charles Booth in 1889 defined East London as the County of London between the City and the River Lea. In 1902 he now considered this area to be the 'true East End' and his attention had been drawn eastward over the Lea into the Borough of West Ham—then outside London in Essex but under the authority of neither—and termed London-over-the-Border by Charles Dickens in 1857. Walter Besant described East London as an area north of the Thames and east of the City that stretched as far as Chingford and Epping Forest, which was similar to the definition used by Robert Sinclair in 1950 that stretched east to include Barking and Dagenham. This broadly matched the Metropolitan Police District east of the city and north of the Thames at that time, and now corresponds to the boroughs of Barking and Dagenham, Hackney, Havering, Newham, Redbridge, Tower Hamlets and Waltham Forest in Greater London.

The area adjacent to the City of London is known as the East End of London. It does not have clearly defined boundaries, but is usually taken to be north of the River Thames, east of the City and west of the River Lea.

All content from Kiddle encyclopedia articles (including the article images and facts) can be freely used under Attribution-ShareAlike license, unless stated otherwise. Cite this article:
East London Facts for Kids. Kiddle Encyclopedia.