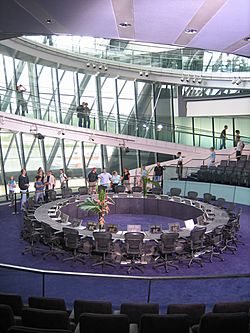 The Chamber of the London Assembly at City Hall.

The London Assembly is an elected body and part of the Greater London Authority that verifies the activities of the Mayor of London. It has the power, with a two-thirds majority, to amend the Mayor's annual budget. The Assembly was established in 2000 and is headquartered at City Hall on the south side of the River Thames. The Assembly is also able to investigate other issues of importance to Londoners, publish its findings and recommendations, and make proposals to the Mayor.

All content from Kiddle encyclopedia articles (including the article images and facts) can be freely used under Attribution-ShareAlike license, unless stated otherwise. Cite this article:
London Assembly Facts for Kids. Kiddle Encyclopedia.