Green Party of England and Wales facts for kids 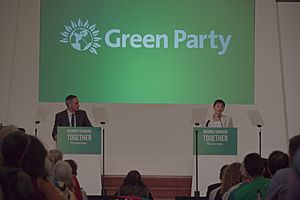 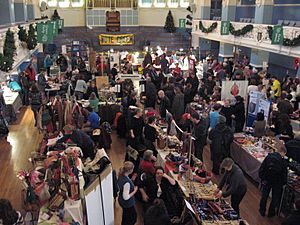 The Green Party of England and Wales is a green, left-wing political party in England and Wales. The party's policies promote environmentalism and progressive social reform. It wants to create a system of proportional representation for British elections. It has progressive policies on animal rights, LGBT rights and believes in drug policy reform. The party also supports a universal basic income (UBI).

Since May 2010, the party has 1 out of 573 English and Welsh seats in the House of Commons of the United Kingdom, two members of the London Assembly and hundreds of elected members of local government. The party is close to the Scottish Green Party and the Green Party of Northern Ireland. The party's first leader was Caroline Lucas from 2008 until 2012. Its current leaders are Jonathan Bartley and Siân Berry, who were elected in September 2018.

All content from Kiddle encyclopedia articles (including the article images and facts) can be freely used under Attribution-ShareAlike license, unless stated otherwise. Cite this article:
Green Party of England and Wales Facts for Kids. Kiddle Encyclopedia.