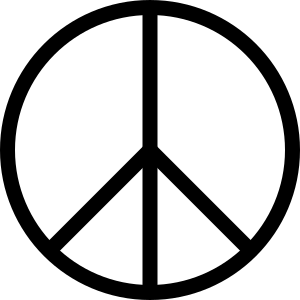 The CND symbol, designed by Gerald Holtom in 1958. It has become a nearly universal symbol of peace with many different versions.

The Campaign for Nuclear Disarmament (CND) is an pacifist organisation that supports nuclear disarmament by the United Kingdom. It also supports disarmament by other countries and stricter weapons rules through international agreements such as the Nuclear Non-Proliferation Treaty. It opposes military action that may result in the use of nuclear, chemical or biological weapons. It also opposes the building of nuclear power stations in the UK.

All content from Kiddle encyclopedia articles (including the article images and facts) can be freely used under Attribution-ShareAlike license, unless stated otherwise. Cite this article:
Campaign for Nuclear Disarmament Facts for Kids. Kiddle Encyclopedia.