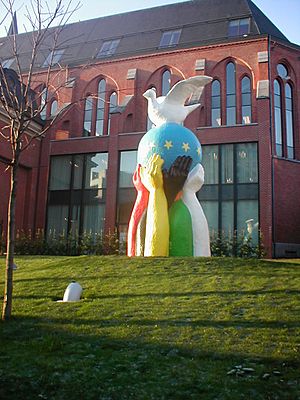 Peace is a time without any fights or wars. In a larger sense, peace (or peacefulness) can mean a state of harmony, quiet or calm that is not disturbed by anything at all, like a still pond with no ripples.

Many people and organizations want peace. One organization that was set up to bring peace among the nations and try to make war a thing of the past was the League of Nations after World War I. When it did not stop World War II, it was replaced by the United Nations which tries to make the world peaceful. This means that if any member is attacked or invaded by another country without attacking that country first, the other members will come to help the country that was attacked first. This idea was used by the United Nations to defend both South Korea and Kuwait when they were attacked.

Martin Luther King, Jr. wrote in a letter he sent from the Birmingham jail that, "True peace is not merely the absence of tension: it is the presence of justice." In other words, Real peace is more than just problems being gone: there must be fairness to have peace.

Alfred Nobel created an annual award, the Nobel Peace Prize, for the person who had done the most to bring peace to the world. 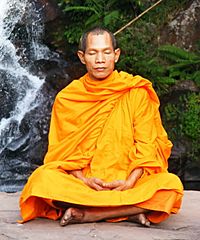 Buddhists think that peace can be gotten once all suffering ends.To get rid of suffering and get this peace, many try to follow a set of teachings called the Four Noble Truths

Jews and Christians believe that true peace comes from a personal relationship with God. Jesus Christ (also called the "Prince of Peace" in the Book of Isaiah) said: "Peace I leave with you; my peace I give you. I do not give to you as the world gives. Do not let your hearts be troubled and do not be afraid." (John 14:27)

Inner peace (or peace of mind) refers to a state of being mentally and spiritually at peace, with enough knowledge and understanding to keep oneself strong in the face of stress. Being "at peace" is considered by many to be healthy and the opposite of being stressed or anxious. Peace of mind is generally associated with bliss and happiness.

Peace of mind, serenity, and calmness are descriptions of a disposition free from the effects of stress. In some cultures, inner peace is considered a state of consciousness or enlightenment that may be cultivated by various forms of training, such as prayer, meditation, Tai chi chuan or yoga, for example. Many spiritual practices refer to this peace as an experience of knowing oneself.

A movement that seeks to get ideals such as the ending of a particular war, minimize inter-human violence in a particular place or type of situation, often linked to the goal of achieving world peace. Means to achieve these ends usually include advocacy of pacifism, non-violent resistance, conscientious objector, diplomacy, boycotts, moral purchasing, supporting anti-war political candidates, demonstrations, and lobbying to create legislation on human rights or of international law. 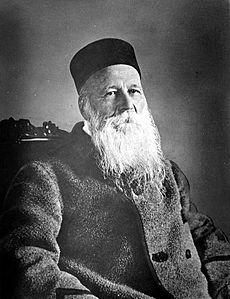 Henry Dunant was awarded the first-ever Nobel Peace Prize for his role in founding the International Red Cross.

The highest honour awarded to peace maker is the Nobel Prize in Peace, awarded since 1901 by the Norwegian Nobel Committee. It is awarded annually to internationally notable persons following the prize's creation in the will of Alfred Nobel. According to Nobel's will, the Peace Prize shall be awarded to the person who "...shall have done the most or the best work for fraternity between nations, for the abolition or reduction of standing armies and for the holding and promotion of peace congresses."

Many different theories of "peace" exist in the world of peace studies, which involves the study of conflict transformation. The definition of "peace" can vary with religion, culture, or subject of study.

Peace is a state of balance and understanding in yourself and between others, where respect is gained by the acceptance of differences, tolerance persists, conflicts are resolved through dialog, people's rights are respected and their voices are heard, and everyone is at their highest point of serenity without social tension.

The following are monuments to peace:

All content from Kiddle encyclopedia articles (including the article images and facts) can be freely used under Attribution-ShareAlike license, unless stated otherwise. Cite this article:
Peace Facts for Kids. Kiddle Encyclopedia.