Alfred Nobel (October 21, 1833 – December 10, 1896) was a Swedish scientist, engineer, and weapons manufacturer. He is well known for the invention of dynamite and for creating the Nobel Prize. Nobel left 31 million kronor (the Swedish currency) to the awards after his death on December 10, 1896.

A less well-known fact is that Alfred Nobel was also a playwright.

Alfred was the third son of Emmanuel Nobel, at an early age he went with his family to St. Petersburg, where his father started a torpedo works. Alfred devoted himself to the study of explosives, and especially to the safe manufacture and use of nitroglycerin (discovered in 1847 by Ascanio Sobrero, a fellow-student with Alfred under Théophile-Jules Pelouze at the University of Torino).

Several explosions were reported at their family-owned factory in Heleneborg, and a disastrous one in 1864 killed Alfred's younger brother Emil and several other workers. 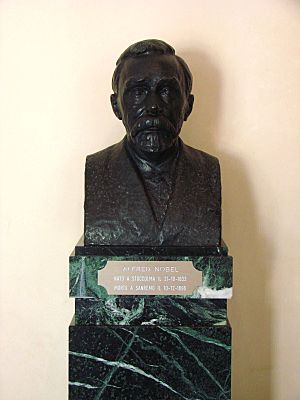 Alfred Nobel - Statue at the entrance of Villa Nobel, Sanremo

Nobel found that when nitroglycerin was incorporated with an absorbent, inert substance like kieselguhr (diatomaceous earth) it became safer and more convenient to manipulate, and this mixture he patented in 1867 as dynamite.

He next combined nitroglycerin with another high explosive, gun-cotton, and obtained a transparent, jelly-like substance, which was a still more powerful explosive than dynamite. Blasting gelatin, as it was called, was patented in 1876, and was followed by a host of similar combinations, modified by the addition of potassium nitrate, wood-pulp and various other substances.

Some thirteen years later Nobel produced ballistite, one of the earliest of the nitroglycerin smokeless gunpowders. This powder was a precursor of cordite. 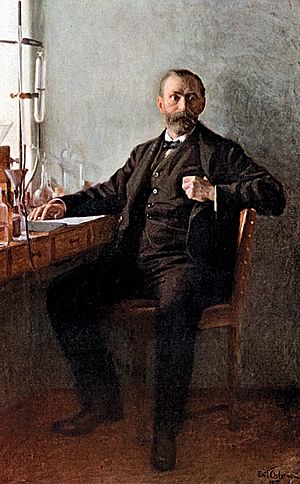 From the manufacture of dynamite and other explosives, and from the exploitation of the Baku oil-fields, in the development of which he and his brothers, Ludvig and Robert Hjalmar (1829-1896), took a leading part, he gained an immense fortune.

Then on November 27, 1895 at the Swedish-Norwegian Club in Paris, Nobel signed his last will and testament and set aside his estate to establish the Nobel Prize after his death (to be awarded annually without distinction of nationality). He died of a stroke on December 10, 1896 at San Remo, Italy.

The first three of these prizes are for eminence in physical science, in chemistry and in medical science or physiology; the fourth is for the most remarkable literary work and the fifth is to be given to the person or society that renders the greatest service to the cause of international brother/sisterhood, in the reduction of standing armies, or in the establishment or furtherance of peace.

All content from Kiddle encyclopedia articles (including the article images and facts) can be freely used under Attribution-ShareAlike license, unless stated otherwise. Cite this article:
Alfred Nobel Facts for Kids. Kiddle Encyclopedia.