Naval mine facts for kids 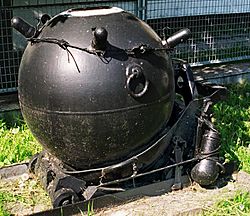 Polish wz. 08/39 contact mine. The horns around the top of the mine, called Hertz horns, are part of the detonation mechanism.

A naval mine is a bomb placed in water to destroy ships or submarines. Unlike depth charges, mines are put in the water and left to wait until they make contact with a ship. Naval mines can be used offensively, to make it harder for enemy ships to sail easily, or trap them into a harbour. They can also be used defensively, to protect friendly ships and create "safe" zones.

Mines can be laid in many ways: by specially built minelayers, refitted ships, submarines, aircraft, or even by dropping them into a harbour by hand. They are a cheap weapon with a basic mine costing as little as US$1000. There are very advanced mines which can cost millions and have several kinds of sensors, and deliver a warhead by rocket or torpedo.

International law says that nations have to say when they put mines in an area. This is to make it easier for civil shipping to avoid the mines. The warnings do not have to be specific; during World War II, Britain said simply that it had mined the English Channel, North Sea, and French coast. 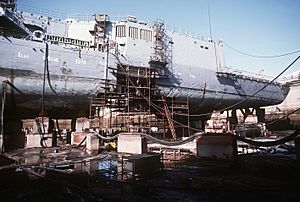 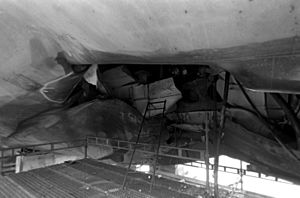 Closeup of the Roberts' damaged hull.

All content from Kiddle encyclopedia articles (including the article images and facts) can be freely used under Attribution-ShareAlike license, unless stated otherwise. Cite this article:
Naval mine Facts for Kids. Kiddle Encyclopedia.