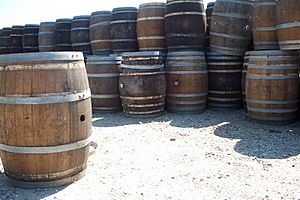 Barrel is an old English word for a big holder of liquids, such as petrol, beer, wine or oil. Barrels are most commonly made of either wood or metal but many are plastic

Barrels are used to age wine, and other beverages such as whisky and beer. Most of those are made of oak wood.

A barrel is also used to measure liquids. One barrel of oil is 158.987 litres (42 US gallons). It is shortened as "bbl". This use may have come from the early Pennsylvanian oil fields where wooden barrels were used to store and move oil around. In 1866, the people of West Virginia started using it regularly. At this time, the amount was set to 42 American gallons. It was later world-wide for measuring amounts of oil and pricing it. Today, oil is rarely stored or transported in actual barrels, but the term "barrel" is still used to mean a 42-gallon measurement.

A barrel can also be used to measure dry goods. For example, a barrel can mean 196 pounds (about 89 kilograms) of flour.

The size of some standard barrels is not the same in all countries. Some countries have different sizes for different liquids.

The first people to start using barrels were the Celts about 350 BC. The Roman Empire started using barrels after trading with the Celts. Barrels remained popular for shipping items until the 20th century.

All content from Kiddle encyclopedia articles (including the article images and facts) can be freely used under Attribution-ShareAlike license, unless stated otherwise. Cite this article:
Barrel Facts for Kids. Kiddle Encyclopedia.