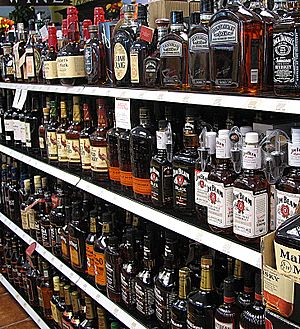 Bottles of bourbon whiskey at a liquor store.

Bourbon is a whiskey that is distilled from grain mash containing at least 51% corn and aged a minimum of two years.

The name is derived from the French Bourbon dynasty, although the precise inspiration for the whiskey's name is uncertain; contenders include Bourbon County in Kentucky and Bourbon Street in New Orleans, both of which are named after the dynasty.

Bourbon has been distilled since the 18th century. Many bourbons are made using a method called "sour mash" where fermentation of each new batch contains a little of the batch before to achieve a consistent quality.

All content from Kiddle encyclopedia articles (including the article images and facts) can be freely used under Attribution-ShareAlike license, unless stated otherwise. Cite this article:
Bourbon whiskey Facts for Kids. Kiddle Encyclopedia.