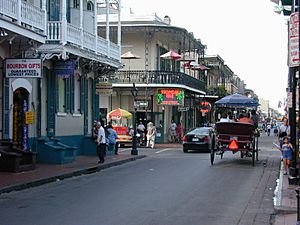 Bourbon Street (French: Rue Bourbon, Spanish: Calle de Borbón) is a historic street in the heart of the French Quarter of New Orleans. It extends thirteen blocks from Canal Street to Esplanade Avenue.

With 17.74 million visitors in 2017 alone, New Orleans depends on Bourbon Street as a main tourist attraction. Tourist numbers have been growing yearly after the devastation of Hurricane Katrina in 2005, and the city has successfully rebuilt its tourist base. For millions of visitors each year, Bourbon Street provides a rich insight into New Orleans' past. 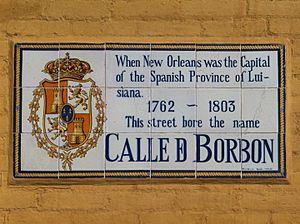 Tile mosaic explaining that the name of the street was Calle de Borbón when New Orleans was capital of the Spanish Province of Luisiana from 1762–1803.

All content from Kiddle encyclopedia articles (including the article images and facts) can be freely used under Attribution-ShareAlike license, unless stated otherwise. Cite this article:
Bourbon Street Facts for Kids. Kiddle Encyclopedia.