Hurricane Katrina was the eleventh tropical storm, fifth hurricane, and the second Category 5 hurricane of the 2005 Atlantic hurricane season. The storm formed over the Bahamas on August 23, where it moved east and hit Florida as a Category 1 hurricane two days later. Katrina then crossed over Florida and strengthened into a Category 5 hurricane in the Gulf of Mexico. The storm then hit Louisiana and Mississippi on the morning of August 29. The leftovers of Katrina then died out over the Great Lakes on August 31.

The damage Katrina brought was so bad that 80% of New Orleans was flooded when the levees to the city broke. Most of the people killed by Katrina were thought to have died from drowning. Because of Katrina's effect on the US, the hurricane was known to be one of the most deadly hurricanes in US history. 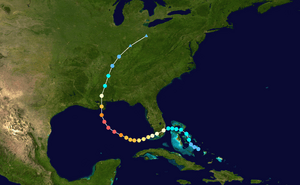 Hurricane Katrina began as Tropical Depression Twelve over the southeastern Bahamas on August 23, 2005. The depression later strengthened into a tropical storm on the morning of August 24 where the storm was also named Katrina. Katrina continued to move into Florida, and became a Category 1 hurricane only two hours before it made landfall around Hallandale Beach on the morning of August 25. The storm weakened over land, but became a hurricane again while entering the Gulf of Mexico.

Katrina began to gain strength very quickly after entering the Gulf, partly because of the storm moving over to the warm waters of the Gulf of Mexico. On August 27, Hurricane Katrina reached Category 3 strength on the Saffir-Simpson Hurricane Scale, becoming the third major hurricane of the season. An "eyewall replacement cycle" once made Katrina stop becoming stronger for a short moment, but made Katrina to become nearly twice as large in the end.

Katrina again began to quickly strengthen, reaching Category 5 strength on the morning of August 28 and reached its strongest point with maximum sustained winds of 175 mph (280 km/h) and a minimum central pressure of 902 mbar. Katrina's minimal pressure measurement made it the fourth most powerful Atlantic hurricane on record at the time, only to be beaten by Hurricanes Rita and Wilma later in the season. In addition, Katrina was also the strongest hurricane ever recorded in the Gulf of Mexico at the time (a record also later broken by Rita).

Katrina made its second landfall on August 29 as a Category 4 hurricane with sustained winds of 125 mph (205 km/h) near St. Bernard, Louisiana. At landfall, hurricane-force winds reached outward 120 miles (190 km) from the center and the storm's central pressure was 920 mbar. After moving over southeastern Louisiana, it made its third landfall over New Orleans, Louisiana and the levees were not made to withstand that much water and ended up collapsing leading to massive flooding. Katrina kept its hurricane strength well into Mississippi, but began to weaken later, finally losing hurricane strength more than 150 miles (240 km) inland near Meridian, Mississippi. Katrina weakened to a tropical depression near Clarksville, Tennessee, but its remains were last seen around the eastern Great Lakes on August 31 when it died. The leftover extratropical cyclone moved quickly to the northeast and affected Ontario and Quebec.

American movie maker Spike Lee made a HBO documentary "When The Levees Broke" that shows the extensive damage in New Orleans after Hurricane Katrina. The documentary suggests that the damage caused was due to the inability of the levees to weather the storm or a probable sabotage. The documentary also suggests that the federal government did a poor job of disaster management. Resources arrived after several days. Most of the people who died did so from drowning.

People on the roofs of their houses avoiding the flood

The name Katrina was retired for the record breaking damage, the deaths, and the economic impact. This means that it will not be used as a name for any new storms in the future. A new name, Katia, replaced it for 2011.

All content from Kiddle encyclopedia articles (including the article images and facts) can be freely used under Attribution-ShareAlike license, unless stated otherwise. Cite this article:
Hurricane Katrina Facts for Kids. Kiddle Encyclopedia.