Bayou La Batre is a fishing village with a seafood-processing harbor for fishing boats and shrimp boats. The local chamber of commerce has described the city as the "Seafood Capitol of Alabama" for packaging seafood from hundreds of fishing boats.

On August 29, 2005, the area was devastated by Hurricane Katrina, which produced the largest storm surge ever recorded in the area, reaching nearly 16 ft (5 m) and pushing many shrimp boats and the cargo ship M/V Caribbean Clipper onto shore. 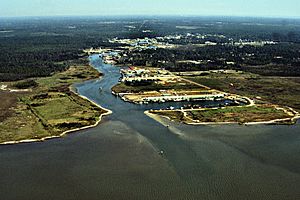 Aerial view of Bayou La Batre from the harbor entrance on the Gulf of Mexico. 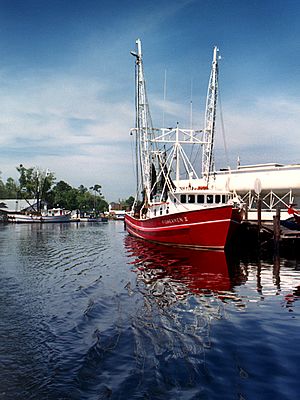 A fishing boat at the dock

As part of the French settlement of the Gulf Coast, the bayou was originally called "Riviere D'Erbane" and acquired the present name from the French-maintained battery of artillery on the west bank ("bayou of the battery"). Bayou La Batre was the first permanent settlement on the south Mobile County mainland and was founded in 1786, when Joseph Bouzage (Bosarge) [1733-95] moved into the area and was awarded a 1,259-acre (509 ha) Spanish land grant on the bayou's west bank.

Born in Poitiers, France, Joseph Bouzage came to the Gulf Coast circa 1760, married Catherine Louise Baudreau (Boudreau) on June 5, 1762, and was the father of seven children, including one son, Jean Baptiste. 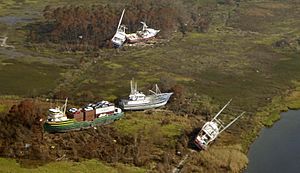 On August 29, 2005, the area was devastated by Hurricane Katrina, with a local storm surge of nearly 16-foot (5 m) and higher waves that engulfed Bayou La Batre and pushed over 23 shrimp boats and the cargo ship M/V Caribbean Clipper onto shore. The captain rode out Katrina on the 179-foot (55 m) cargo ship, owned by Caribbean Shipping Inc., and the ship was returned to sea six months later, using a large crane.

Students from the Alba Middle School documented the destruction through a series of photos that were exhibited at various venues in Alabama and the Chicago, Illinois region. Some of these were published in a book titled Eyes of the Storm: A Community Survives after Katrina (ISBN 978-0-9789362-0-4).

In October 2005, seven weeks after Hurricane Katrina, Bayou La Batre was adopted by the City of Santa Monica, California (see: "Santa Monica Pier") to assist in clean-up activities. The Santa Monica City Council approved loaning Bayou La Batre 18 vehicles, including six pickups, two trucks with large cranes, utility vehicles with smaller cranes, a dump truck, street sweepers, a riding lawnmower, and six chainsaws. The equipment was used to help remove debris and fishing boats from downtown; however, the larger shrimp boats that were washed into the surrounding woods by the flood waters remain there today.

People from all over the world including the United States, South America, and Africa have boats built in Bayou La Batre frequently. In 2005, Steiner Ship Yard was asked by Walt Disney Studios to build a pirate ship, the Black Pearl; the pitch-black ship was actually a huge wooden prop built on top of a modern 96-foot-long steel utility boat. Crews sailed the ship out of the bayou to the Caribbean for the filming of sequels to Disney's 2003 film "Pirates of the Caribbean: The Curse of the Black Pearl".

Another ship, the FV Cornelia Marie from the Deadliest Catch series, was built in Bayou La Batre in 1989.

The climate in this area is characterized by hot, humid summers and generally mild to cool winters. According to the Köppen Climate Classification system, Bayou La Batre has a humid subtropical climate, abbreviated "Cfa" on climate maps.

Both Alma Bryant and Booth Elementary are located on the northernmost edge of the city. Bryant, built in 1998, slightly delayed by Hurricane Georges, and Booth, built in 2006, delayed by Hurricane Katrina, are located on Hurricane Boulevard. Both schools' students were (in part) located in what is now Alba Middle School further south in Bayou La Batre. Alba High School first combined with Grand Bay High School in 1998 in the newly built, centrally located Alma Bryant High School, located on 16th Section land (land dedicated for school purposes). Alba Middle (which was in great part located in portable classrooms and was a part of the high School campus, as was Grand Bay Middle) took over the high school building, greatly relieving overcrowding. Similarly, the Alba Elementary Campus which shared land with the middle school, while being mostly autonomous, also became part of Alba Middle School. Alba and Grand Bay Middle are the focal point of bus routes for all school buses for Bryant High, those buses shared in grades 6-12 as a cost-saving effort to avoid overlapping routes for the separate schools.

In December 2007, a new library was opened to serve the area's Asian-American community. The library is located on Wintzell Avenue in the Bayou La Batre office of Boat People SOS, a national group that assists Vietnamese-Americans. The Mobile County Commission gave $2,500. The library will be used as a place where elderly immigrants can master computer skills, children can practice their Vietnamese after school, and day laborers can surf the Web after work.

All content from Kiddle encyclopedia articles (including the article images and facts) can be freely used under Attribution-ShareAlike license, unless stated otherwise. Cite this article:
Bayou La Batre, Alabama Facts for Kids. Kiddle Encyclopedia.