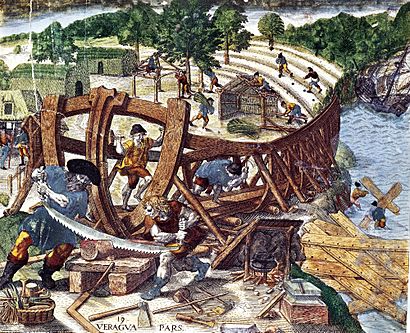 An expedition's shipwrights building a brigantine, 1541

Shipbuilding is the construction of ships and other floating vessels. It normally takes place in a specialized facility known as a shipyard. Shipbuilders, also called shipwrights, follow a specialized occupation that traces its roots to before recorded history.

Shipbuilding and ship repairs, both commercial and military, are referred to as "naval engineering". The construction of boats is a similar activity called boat building.

The dismantling of ships is called ship breaking.

All content from Kiddle encyclopedia articles (including the article images and facts) can be freely used under Attribution-ShareAlike license, unless stated otherwise. Cite this article:
Shipbuilding Facts for Kids. Kiddle Encyclopedia.