Komárno is a town in the southwest of Slovakia. It is an important, historical town which is famous for having the largest fortification in Europe. The river Vah flows into the Danube at Komárno. The Danube at this point forms the border between the countries Slovakia and Hungary. The Hungarian name for the town is Komárom. 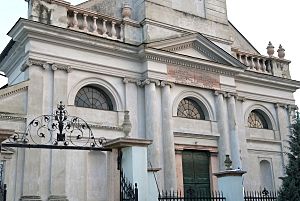 At first there was just one town, with the Danube flowing through the middle of the town. Since the end of World War I, when Czechoslovakia became a separate country from Hungary, the town has been split into two: Komárno is on the left (north) bank of the river, now in Slovakia, and Komárom is on the right (south) bank of the river, in Hungary. Komárno has a population of 37.000 and Komárom has a population of 19.600. The two towns are joined by a bridge. 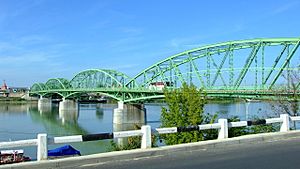 Elisabeth Bridge across Danube, seen from the Hungarian side

People have lived in the area of Komárno for thousands of years. The first castle was built in the 10th century. In 1244 a law was made which said that every merchant who sailed a boat down the Danube past Komárno had to stop for several days in Komárno and unload all the cargo so that people could buy it if they wanted. If the merchant did not want to do this he had to pay a large duty (amount of money) to continue his journey. This law was stopped in 1751.

In the 15th century Komárno had become very important. The rulers and the court of the kingdom of Hungary often stayed there. The fortress was very powerful and they managed to fight off Turkish invaders after the Turks had already captured Esztergom and Buda. The fort was badly damaged in 1783 in an earthquake, but it was built up again because of the Napoleonic wars. 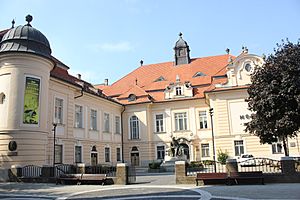 Komárno is a nice town to visit. There are many tourist attractions, especially the fort which is on the Hungarian side of the town (Komárom). There are also spa health centres where people can swim or bathe gently in the waters. 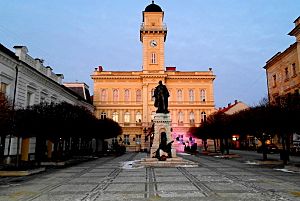 The majority of the historical and cultural sites, including the town center of the former Komárno, were well preserved and remain to this day. The county and town halls, the courthouse, St. Andrews Church, the Danube Museum, and other buildings are examples of some of the many historical structures still standing today.

Klapka Square (named after György Klapka, the Hungarian general who defended Komárno against the Austrians in the War of Independence and the well preserved remains of the fortification structure are Komárno's main historical monuments symbolizing both the pride and resilience of this historical important town.

All content from Kiddle encyclopedia articles (including the article images and facts) can be freely used under Attribution-ShareAlike license, unless stated otherwise. Cite this article:
Komárno Facts for Kids. Kiddle Encyclopedia.