Maria Theresa of Austria (May 13, 1717 – November 29, 1780) was the only female head of the Habsburg Dynasty. She was the Holy Roman Empress, queen of Hungary and Bohemia, and archduchess of Austria. During her rule she changed the royal palace outside Vienna (the Austrian capital) to look much like Versailles. Vienna itself became an important center for the arts, especially music. Maria Theresa added support to her absolute power by tightening her hold on the government. She also improved conditions for the peasants. She is generally known to history as the Empress Maria Theresa. 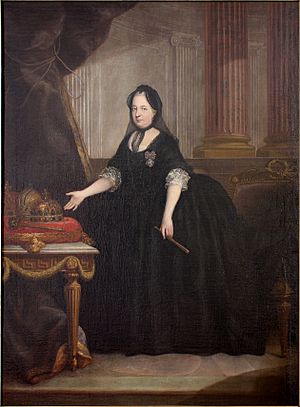 Maria Theresa was born in Vienna, Austria, on May 13, 1717. Her parents were Charles VI, Holy Roman Emperor and Elisabeth Christine of Brunswick-Wolfenbüttel.

Maria Theresa was married to Duke Francis Stephan I of Lorraine for love. They had sixteen children who are named here:

Maria Theresa died in Vienna, Austria, on November 29, 1780. She was the Archduchess of Austria and queen of Bohemia and Hungary. Oldest daughter of Charles VI.

All content from Kiddle encyclopedia articles (including the article images and facts) can be freely used under Attribution-ShareAlike license, unless stated otherwise. Cite this article:
Maria Theresa of Austria Facts for Kids. Kiddle Encyclopedia.