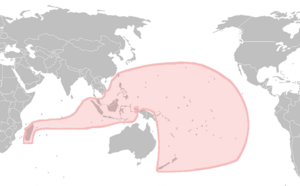 Area historically regarded as being inhabited by the original Austronesian peoples and later migrations.

Austronesian peoples is a term referring to people that live in Southeast Asia, Oceania and Madagascar, who are speakers of the Austronesian languages. They are thought to have originally come from the indigenous peoples of Taiwan.

All content from Kiddle encyclopedia articles (including the article images and facts) can be freely used under Attribution-ShareAlike license, unless stated otherwise. Cite this article:
Austronesian peoples Facts for Kids. Kiddle Encyclopedia.