The Dutch East Indies, or Netherlands East Indies, was the Dutch colony that is now modern Indonesia. The main city was Batavia, now called Jakarta. 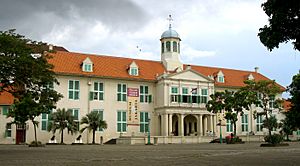 The old Stadhuis of Batavia, the home of Governor General of the Dutch East India Company. The building is now the Jakarta Historical Museum.

It was made from the colonies of the Dutch East India Company that came under the control of the Netherlands in 1800. After World War 2, Indonesia declared independence in 1945. After a revolution, the Netherlands gave Indonesia sovereignty in December 1949.

All content from Kiddle encyclopedia articles (including the article images and facts) can be freely used under Attribution-ShareAlike license, unless stated otherwise. Cite this article:
Dutch East Indies Facts for Kids. Kiddle Encyclopedia.