Empire of Japan facts for kids 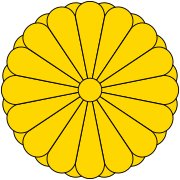 Coat of arms of the Empire of Japan.

Territory of the Empire of Japan.

The Empire of Japan (Japanese: 大日本帝国; said Dai Nippon Teikoku; officially Empire of Greater Japan or Greater Japanese Empire; also called Imperial Japan and the Japanese Empire) was a government of the areas ruled by Japan during the period from the Meiji Restoration to the Japanese defeat in World War II. The Emperors during this time, were Emperor Meiji (Mutsuhito), Emperor Taishō (Yoshihito) and Emperor Shōwa (Hirohito). It is considered to go from the year 1868 to 1945.

In those years, Japan changed very much. It became one of the most powerful countries in the world. Japan built a powerful army and navy, and changed from an agricultural to an industrial economy. The Japanese began to invade and occupy other near countries like Korea, Taiwan, and part of China to get resources.

The Empire of Japan surrendered to the Allies on September 2, 1945 after the atomic bombings of Hiroshima and Nagasaki, after a long war against the Allied nations of World War II. The Allies occupied the country and led many changes, including a new constitution. Allied occupation and reconstruction of the country continued well into the 1950s.

All content from Kiddle encyclopedia articles (including the article images and facts) can be freely used under Attribution-ShareAlike license, unless stated otherwise. Cite this article:
Empire of Japan Facts for Kids. Kiddle Encyclopedia.