The Yayoi period (弥生時代code: ja is deprecated , Yayoi jidai) is a time in the history of Japan which is traditionally dated 300 BC to 300 AD.

Iron and bronze were first used in Japan at about the same time. Iron was used for tools and weapons. Bronze was used for ritual objects such as mirrors, daggers and spears.

The Yayoi tools included as axes and hoes for agriculture etc., but also weapons such as arrowheads and swords. 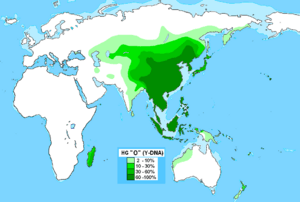 The Yayoi people (弥生人 Yayoi jin) were ancient people that migrated to the Japanese archipelago from southeastern China during the Yayoi period (300 BCE–300 CE). Modern Japanese people are direct descedants of the Yayoi and have about 97% Yayoi DNA.

The Yayoi and the modern Japanese people are closely related to other East Asian (or Mongoloid) people, such as Chinese or Vietnamese people. They belonged to the haplogroup O and spoke the proto-Japonic languages. Most scientists and linguists suggest that they originated somewhere in southeastern China and migrated from their into Japan.

All content from Kiddle encyclopedia articles (including the article images and facts) can be freely used under Attribution-ShareAlike license, unless stated otherwise. Cite this article:
Yayoi period Facts for Kids. Kiddle Encyclopedia.