The Jōmon period is the time in Japanese prehistory, traditionally dated between c. 14,000–300 BCE, recently refined to about 1000 BCE, during which Japan was inhabited by a hunter-gatherer culture, which reached a considerable degree of cultural complexity. The name "cord-marked" was first applied by the American scholar Edward S. Morse, who discovered sherds of pottery in 1877 and subsequently translated it into Japanese as jōmon. 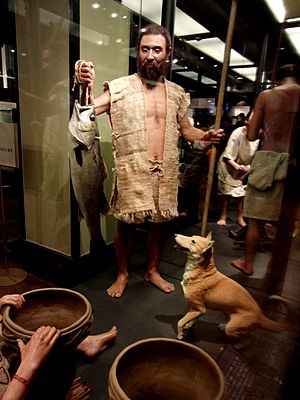 The pottery style characteristic of the first phases of Jōmon culture was decorated by impressing cords into the surface of wet clay and is generally accepted to be among the oldest in East Asia and the world.

The Jōmon period was rich in tools and jewellery made from bone, stone, shell and antler; pottery figurines and vessels; and lacquerware. It is often compared to pre-Columbian cultures of the North American Pacific Northwest and especially to the Valdivia culture in Ecuador because in these settings cultural complexity developed within a primarily hunting-gathering context with limited use of horticulture. 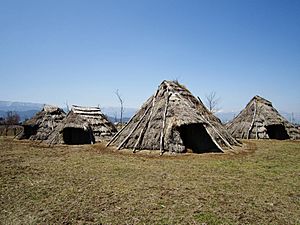 The origin myths of Japanese civilization extend back to periods now regarded as part of the Jōmon period, though they show little or no relation to what we know archaeologically of Jōmon culture. 11 February 660 BCE is the traditional founding date of the Japanese nation by Emperor Jimmu. This version of Japanese history, however, comes from the country's first written records, the Kojiki and Nihon Shoki, dating from the 6th to the 8th centuries, after Japan had adopted Chinese characters.

Some elements of modern Japanese culture may date from this period and reflect the influences of a mingled migration from the northern Asian continent and the southern Pacific areas and the Jōmon peoples. Among these elements are the precursors to Shinto, some marriage customs, architectural styles, and technological developments such as lacquerware, laminated yumi, metalworking, and glass making.

All content from Kiddle encyclopedia articles (including the article images and facts) can be freely used under Attribution-ShareAlike license, unless stated otherwise. Cite this article:
Jōmon period Facts for Kids. Kiddle Encyclopedia.