Emperor Jimmu (神武天皇code: ja is deprecated , Jinmu-tennō) was the 1st emperor of Japan, according to the traditional order of succession. Jimmu is known as the founder of the Imperial dynasty.

There are no certain dates for this emperor's life or reign. The names and sequence of the early emperors were not confirmed as "traditional" until the reign of Emperor Kammu, who was the 50th monarch of the Yamato dynasty.

Jimmu is almost certainly a legend. His name and genealogy are recorded in the Kojiki and Nihonshoki. Jimmu is regarded as a direct descendant of the Shinto sun goddess, Amaterasu.

During reign of Emperor Jimmu, the capital of Japan was at Kashiwabara, Yamato at the foot of Mt. Unebi.

The absence of information about Jimmu does not mean that he did or did not exist. There is very little data about the rulers of Japan before the reign of Emperor Bidatsu

The traditional story is that Jimmu came from Kyushu to Yamato Province on the island of Honshu. The story explains that he followed a three legged crow. He established his reign at Kashihara near Osaka. 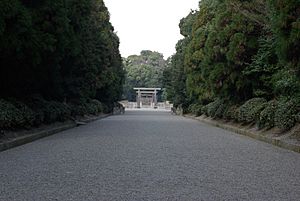 The mausoleum of Emperor Jimmu in Nara Prefecture.

This emperor's official name after his death (his posthumous name) was regularized many centuries after the lifetime which was ascribed to Jimmu.

The actual site of his grave is not known. According to the Imperial Household Agency, the emperor is venerated at a memorial Shinto shrine (misasagi) in Kashihara at Nara. The mausoleum is located a short distance from Kashihara Shrine.

In 1872, the Meiji government declared that February 11, 660 BC was the exact date on which the reign of Jimmu began. This was identified as the start of the Japanese nation. This mythical date was commemorated as the holiday Kigensetsu ("Era Day"). This national holiday was celebrated from 1872 to 1948.

The Kigensetsu events in 1940 were special. They celebrated what was believed to be 2,600 years since the start of Emperor Jimmu's reign.

There has been a similar Japanese national holiday since February 11, 1966. It is called National Foundation Day (Kenkoku Kinen no hi).

All content from Kiddle encyclopedia articles (including the article images and facts) can be freely used under Attribution-ShareAlike license, unless stated otherwise. Cite this article:
Emperor Jimmu Facts for Kids. Kiddle Encyclopedia.