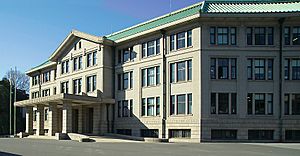 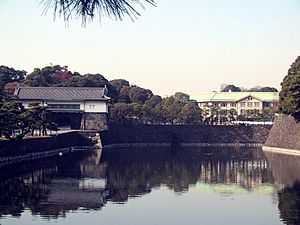 The Imperial Household Agency building is located near the Sakashita gate of the palace.

The Imperial Household Agency (宮内庁code: ja is deprecated , Kunaichō) is a government agency of Japan. This bureaucracy is concerned with Imperial House of Japan (Japan's imperial family).

In the 18 centuries before the Second World War, it was named the Imperial Household Ministry (宮内省code: ja is deprecated , Kunaishō).

The organization and functions of the Imperial Household were established in the eighth century. The fundamental elements of this system evolved during the course of centuries.

The main focus of attention is the living Imperial family. At the same time, the agency looks 890+ sites which may contain the remains of imperial family members.

The Grand Steward is charged with overseeing all activities of today's agency.

The basic structures remained in place until the Meiji Restoration; and some elements of the ancient organizing template remain:

All content from Kiddle encyclopedia articles (including the article images and facts) can be freely used under Attribution-ShareAlike license, unless stated otherwise. Cite this article:
Imperial Household Agency Facts for Kids. Kiddle Encyclopedia.