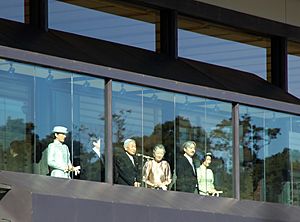 The Emperor and Empress with their sons and daughters-in-law, 2005 — from left to right: Crown Princess Masako, Crown Prince Naruhito, Akihito, Empress Michiko, Prince Akishino and Princess Akishino
For the administration of the Imperial household, see Imperial Household Agency.

The Imperial House of Japan (皇室code: ja is deprecated , kōshitsu), also referred to as the "Imperial family", is made up of the extended family of the reigning Emperor of Japan.

Eleven branches of the Imperial House were removed in 1947.

There are 18 members of the Imperial Family.

The Emperor Emeritus was born at the Imperial Palace in Tokyo on 23 December 1933, the elder son and sixth child of the Shōwa Emperor and Empress Kōjun. He was married on 10 April 1959 to Michiko Shōda. Emperor Akihito succeeded his father as emperor on 7 January 1989.
The Empress Emerita, formerly Michiko Shōda, was born in Tokyo on 24 October 1934, the eldest daughter of Hidesaburo Shōda, president and honorary chairman of Nisshin Flour Milling Inc..

The Prince Hitachi was born on 28 November 1935, the second son and seventh child of the Emperor Shôwa and Empress Kojun. His childhood title was Prince Yoshi. By getting the title Prince Hitachi, he started a new branch of the imperial family on 1 October 1964, the day after his wedding.
The Princess Hitachi was born on 19 July 1940, the daughter of former Count Yoshitaka Tsugaru. Prince and Princess Hitachi have no children.
The Princess Mikasa is the widow of The Prince Mikasa (born on 2 December 1915, died 27 October 2016), the fourth son of the Emperor Taishō and Empress Teimei, and a younger brother of Emperor Shōwa. The princess was born on 6 June 1923, the second daughter of Viscount Masanori Takagi. Prince and Princess Mikasa married 22 October 1941. They have two daughters and three sons.

The living former imperial princesses are:

See also: Line of succession to the Japanese throne

All content from Kiddle encyclopedia articles (including the article images and facts) can be freely used under Attribution-ShareAlike license, unless stated otherwise. Cite this article:
Imperial House of Japan Facts for Kids. Kiddle Encyclopedia.