Emperor Taishō (meaning "Great Justice") was the name given to Yoshihito at the time of his coronation. Emperors of Japan receive a new name at the time of their coronation, and people start using the new name, both to refer to the emperor himself and the name of the era during which he reigned.

Taishō's early life was marked by many changes in the role of emperor; and his reign was a period of consolidation. 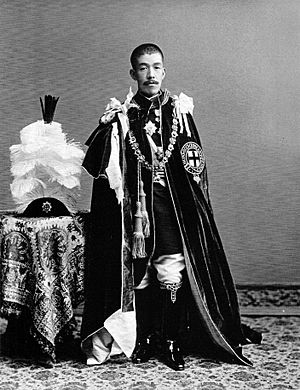 A timeline of major events includes:

All content from Kiddle encyclopedia articles (including the article images and facts) can be freely used under Attribution-ShareAlike license, unless stated otherwise. Cite this article:
Emperor Taishō Facts for Kids. Kiddle Encyclopedia.