The Imperial Japanese Army (IJA; error: {{nihongo}}: Japanese or romaji text required (help) Dai-Nippon Teikoku Rikugun; "Army of the Greater Japanese Empire") was the official ground-based armed force of the Empire of Japan from 1868 to 1945. It was controlled by the Imperial Japanese Army General Staff Office and the Ministry of War, both of which were nominally subordinate to the Emperor of Japan as supreme commander of the army and the navy.

In the mid-19th century, Japan had no unified national army and the country was made up of feudal domains (han) with the Tokugawa shogunate (bakufu) in overall control, which had ruled Japan since 1603. The bakufu army, although large force, was only one among others, and bakufu efforts to control the nation depended upon the cooperation of its vassals' armies. The opening of the country after two centuries of seclusion led subsequently led to the Meiji Restoration and the Boshin War in 1868.

The IJA was dissolved at the end of World War II. Article 9 of the Constitution of Japan prohibits the use of aggressive force as a means for settling international disputes.

The conscription law enacted in 1873, made universal military service compulsory for all male subjects in the country. The law called for a total of seven years of military service: three years in the regular army (jōbigun), two years in the reserve (dai'ichi kōbigun), and an additional two years in the second reserve (daini kōbigun). All able-bodied males between the ages of 17 and 40 were considered members of the national guard (kokumingun), which would only see service in a severe national crisis, such as an attack or invasion of Japan. 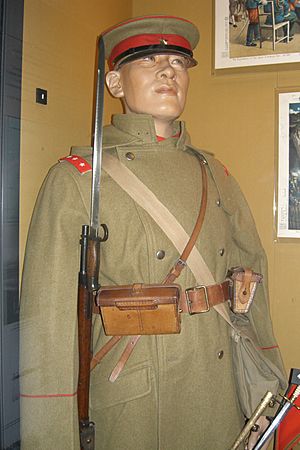 Imperial Japanese Army uniform as worn on the expedition to Kiaochow

All content from Kiddle encyclopedia articles (including the article images and facts) can be freely used under Attribution-ShareAlike license, unless stated otherwise. Cite this article:
Imperial Japanese Army Facts for Kids. Kiddle Encyclopedia.