Emperor of Japan facts for kids 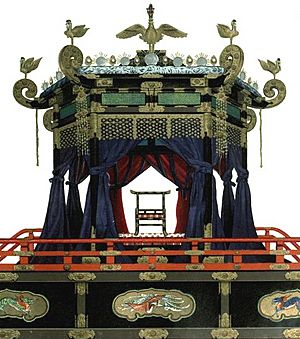 Each emperor was confirmed in ceremonies. This was used for Emperor Taishō in 1912. 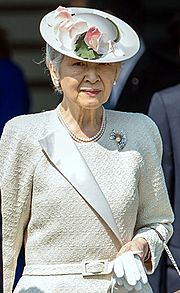 The Emperor (天皇, tennō, literally "heavenly sovereign") is a symbol of the Japanese nation and the unity of its people.

The emperor is the head of the Imperial House of Japan. He is a ceremonial figurehead.

In the Japanese constitutional monarchy, the emperor does not have any political power. In world politics, he is the only current emperor.

The current emperor is His Imperial Majesty the Emperor Akihito. He has been on the Chrysanthemum Throne since his father Emperor Shōwa (Hirohito) died in 1989.

Since the mid-1800s, the Imperial Palace has been located on the former site of Edo Castle （江戸城）in the heart of Tokyo. Earlier emperors lived in Kyoto for nearly eleven centuries.

The earliest monarch listed as an emperor who is believed by historians to have existed in history was Emperor Ojin.

The imperial dynasty that rules Japan today began as a local kingship in Central Japan in the 500s. It slowly increased its power over its neighbors. This led to a more centralized state made up of almost all of the central areas of what is now Japan. The remote areas were outside its borders.

The emperor's role is defined in Chapter I of the 1947 Constitution of Japan.

The emperor of Japan has no reserve powers. 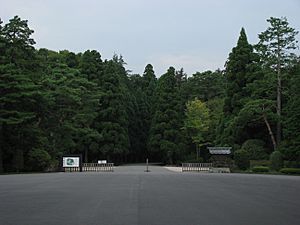 Entrance of the Musashi Imperial Graveyard in Hachiōji, Tokyo

Succession is now controlled by laws passed by the Japanese Diet. The current law does not let females take the throne. A change to this law was considered until Princess Kiko gave birth to a son.

Until the birth of a son to Prince Akishino on September 6, 2006, there was a potential succession problem. No male child had been born into the imperial family since Prince Akishino in 1965. Following the birth of Princess Aiko, some felt they needed to change the current Imperial Household Law to allow women to succeed to the throne. In January 2005 Prime Minister Junichiro Koizumi created a group of judges, university professors, and civil servants to study the problem.

On October 25, 2005 they recommended changing the law to allow females of the male line of imperial descent to ascend the Japanese throne. On January 20, 2006, Prime Minister Junichiro Koizumi made an announcement that they would change the law to allow women to ascend the throne. However, after finding out that Princess Kiko was pregnant with her third child, Koizumi decided to wait. Her son, Prince Hisahito, is the third in line to the throne under the current law of succession. 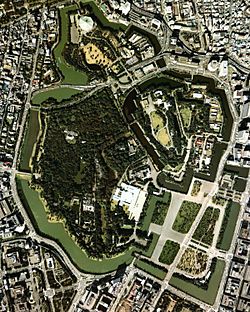 Naming the emperors of Japan is difficult because of differences between Japan and the Western world. The Japanese use "{name} tennō" (for the past emperors) or "Kinjō Heika" (今上陛下） for the current one). Problems occur because emperors are named "{name} tennō" after their death.

Some Japanese once thought it was rude to call a person of noble rank by their given names. This belief is not commonly followed today, but still used for the imperial family. The current emperor on the throne is almost always referred to simply as Tennō Heika (天皇陛下, lit. "His Majesty the Emperor") or formally as Kinjō Heika (今上陛下).

In English, the recent emperors are called by their personal names.

All content from Kiddle encyclopedia articles (including the article images and facts) can be freely used under Attribution-ShareAlike license, unless stated otherwise. Cite this article:
Emperor of Japan Facts for Kids. Kiddle Encyclopedia.