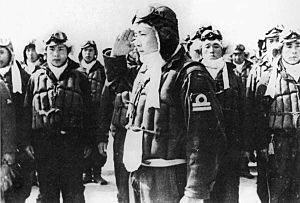 A kamikaze pilot getting his last orders.

Kamikaze (Japanese: 神風; literally: "god-wind"; usual translation: "divine wind") is a word of Japanese origin. It comes from the name the Japanese gave to a typhoon that destroyed the Mongol ships in the 13th century and saved the country from invasion. In Western culture, the word kamikaze is used to mean the suicide pilots of the Empire of Japan. Those pilots attacked the ships of the Allied Powers in the final years of World War II, during which they flew their planes into enemy ships. It has also come to mean other kinds of suicide attacks.

Most people in Western culture believe the word kamikaze was the name used by the Japanese military for pilots, but that is not true. Their correct name was tokubetsu kōgeki tai (特別攻撃隊), which literally means "special attack team." This is usually abbreviated tokkōtai (特攻隊) in a shortened form. The suicide attacks made by Navy pilots were called shinpū tokubetsu kōgeki tai (神風特別攻撃隊, "divine wind special attack team"). The American translators used a different style of pronunciation of the Japanese language by mistake, and read the word shinpū ("divine wind") as kamikaze, as those Japanese characters can be read both ways. The name became well known so, after the war, the Japanese also started using it. 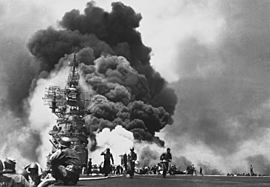 After the attack on Pearl Harbor on December 7, 1941, the Japanese Navy and its Air force were defeated in several important battles, like Midway and the Philippine Sea. They lost many ships (including nearly all the Japanese aircraft carriers), hundreds of fighter aircraft, and many of their best pilots. The Japanese industry was small and very poor compared to the American industry. For this reason, the United States replaced their lost ships and planes with better ones very quickly; but Japan could only make few, and of poor quality. During 1943-44, the Allied forces were moving towards Japan. At the Battle of the Philippine Sea, on June 19-20, 1944, the Japanese forces were pushed back to the Philippines.

On July 15, Saipan (in the Northern Mariana Islands) was captured by Allied forces. The capture of Saipan made it possible for the United States Army Air Force to attack Japan itself, using B-29 Superfortress bombers. After the fall of Saipan, the Japanese commanders knew that the Allies would try to capture the Philippines next. The Philippines were very important because they were located between the oil fields of Southeast Asia and Japan. If Japan lost control over the Philippines, they would have little fuel left for their ships. On October 17, the Allies started the attack on the Philippines in the Battle of Leyte Gulf.

Vice Admiral Takijiro Onishi was in charge of the Japanese Air Force in Manila. He understood that it was impossible to win the battle with so few aircraft and trained pilots. For this reason, he decided to form a suicide attack force, the Special Attack Unit. A group of 24 student pilots volunteered for the mission. The Special Attack force was organized into 4 groups, Unit Shikishima, Unit Yamato, Unit Asahi, and Unit Yamazakura. These names were taken from a patriotic poem (waka or tanka), written by the Japanese classical poet, Motoori Norinaga: (敷島の 大和心を 人問はば 朝日に匂う 山桜花). The poem reads: "Shikishima no Yamato-gokoro wo hito towaba, asahi ni niou yamazakura bana

USS Columbia is attacked by a kamikaze on January 6, 1945.

The Japanese were defeated at the battle of Leyte Gulf, but the Special Attack force had great success. The first kamikaze attack took place on October 21, 1944, against the flagship of the Royal Australian Navy, HMAS Australia. 30 sailors died in the attack, including its Captain Emile Dechaineux, and many more were wounded. By October 26, 47 more Allied ships had been attacked. Most of them were badly damaged or sunk, like the United States aircraft carrier USS St. Lo.

This early success convinced the Japanese commanders to continue the kamikaze attacks. Many more pilots were recruited to act as kamikaze. Over the next few months, more than 2,000 planes made such attacks. When the Japanese stock of airplanes began to run low, new models of low quality were built for these missions. Some of them, like the Nakajima Ki-115 Tsurugi, were made mostly of wood and used stocks of older engines. The plane's landing gear was usually dropped by the pilot after takeoff so it could be used by other aircraft, because he would not be landing again. Similar suicide attack programs were planned, including rocket bombs with pilots (called Ohka) and submarine torpedoes (Kaiten).

The high point of kamikaze attacks came from April 6 to May 25, 1945 during the Battle of Okinawa, in Operation Kikusui ("floating chrysanthemums"). In that time, seven important waves of attacks took place, with more than 1,500 kamikaze planes. Because their training had been too short and their airplanes were poorly made, kamikaze pilots were easy targets for the experienced Allied pilots, who also had much better planes. But still, the kamikaze who escaped the anti-aircraft fire and the enemy fighter airplanes did great damage to the Allied fleet. The Allies won the battle, but they lost many ships and men because of kamikaze attacks. By the end of the battle, at least 21 American ships had been sunk by kamikazes. Some ships from other Allied navies were also sunk, and dozens more were damaged.

Hundreds of extra kamikaze planes were ready to defend Japan from invasion. However, with Japan's surrender on August 15 after the atomic bombings of Hiroshima and Nagasaki and the declaration of war by the Soviet Union, they were never used again.

The most important effect of the attacks was creating fear among the Allied troops. When the American ships went to the last battles, the crews were very afraid of kamikaze pilots. By the end of World War II, the Japanese Navy had sacrificed 2,525 kamikaze pilots, and the Air force had lost 1,387. The Japanese government said, the missions sank 81 ships and damaged 195. They also claimed that the kamikaze attacks were the cause of 80% of Allied deaths in the last years of the War.

The American sources claim that kamikaze sunk less ships than the Japanese say. But still, they agree that they did very important damage. According to a U.S. Air Force source, the kamikaze attackers sunk 34 Navy ships, damaged 368 others, killed 4,900 sailors, and wounded over 4,800. In a 2010 book, the historian Robin Rielly said that about 60 U.S. ships were sunk by kamikazes, and over 400 were damaged by them. 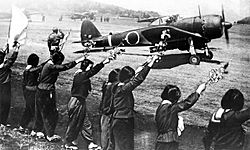 High school girls say farewell to Kamikaze pilots with cherry blossom branches at the Battle of Okinawa, on April 12, 1945.

Many kamikaze pilots offered themselves as volunteers for the mission. They were usually very young, between 18 and 24 years old. Their belief was that dying when striking the enemies of Japan and the Emperor down was a very honorable death. This principle was traditional since the days of the samurai, and gave great importance to the sense of duty and obedience. This idea was called Giri ("Obligation"), and was part of the code of conduct of the Japanese warriors since the Middle Ages, the Bushido. Many young men sacrificed themselves by their free will because these beliefs and their love for the home land were the most important things for them. The tokkōtai pilot's manual told pilots to never close their eyes. This was because if a pilot closed his eyes he would miss his target. In the final moments before the crash, the pilot was to shout "Hissatsu!" ("Critical Strike!") as loud as he could.

However, many others did so because of social pressure. Not offering oneself as a volunteer was a sign of cowardice and dishonor. Several professional pilots who were ordered to do suicide attacks did it because of military obedience, not because of honor. One of the first kamikaze pilots, Lieutenant Yukio Seki, wrote after nearly being forced to volunteer:

Japan's future is pale if it is forced to kill one of its best pilots. I am not going on this mission for the Emperor or for the Empire... I am going because I was ordered to.

A special ceremony before going to combat usually took place. Pilots drank sake and ate a ball of rice. They were given medals, and a katana sword. They put on a headband with the rising sun, and a sennibari, a "belt of a thousand stitches" made by a thousand women, who made one stitch each. Many times, they took prayers written by their families with them. According to legend, young pilots on kamikaze missions many times flew southwest from Japan over the 922-metre (~3000 ft) Mount Kaimon. Suicide mission pilots looked over their shoulders to see this, and said farewell to their country. Another legend says that kamikaze pilots dropped flowers from the air, as they departed on their final missions. Some places, like the hills near Kikajima airport, are said to have beds of cornflower that bloom in early May from those days.

A kamikaze is a surprise attack, according to our ancient war tactics. Surprise attacks will be successful the first time, maybe two or three times. But what fool would continue the same attacks for ten months? Emperor Hirohito must have realized it. He should have said "Stop."

All content from Kiddle encyclopedia articles (including the article images and facts) can be freely used under Attribution-ShareAlike license, unless stated otherwise. Cite this article:
Kamikaze Facts for Kids. Kiddle Encyclopedia.