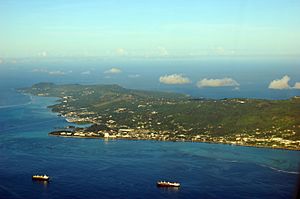 Saipan seen from the air 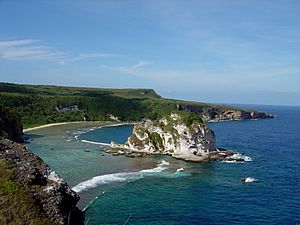 The western side of the island is lined with sandy beaches and an offshore coral reef which creates a large lagoon. The eastern shore is composed primarily of rugged rocky cliffs and a reef. A narrow underwater bank of Marpi Reef lies 28 mi (45 km) north of the Saipan, and CK Reef lies in the west of the island.

The highest elevation on Saipan is a limestone-covered mountain called Mount Tapochau at 1,560 ft (480 m). Unlike many of the mountains in the Mariana Islands, it is not an extinct volcano, but is a limestone formation.

To the north of Mount Tapochau towards Banzai Cliff is a ridge of hills. Mount Achugao, situated about 2 miles north, has been interpreted to be a remnant of a stratified composite volcanic cone whose Eocene center was not far north of the present peak.

Saipan's flora is predominantly limestone forest. Some developed areas on the island are covered with Leucaena leucocephala, also known as "tangan-tangan" trees, which were spread broadly some time after World War II. Tangan-Tangan trees were introduced, primarily, as an erosion-prevention mechanism, due to the decimation of the landscape brought on by WWII. Remaining native forest occurs in small isolated fragments on steep slopes at low elevations and highland conservation areas of the island. Coconuts, papayas, and Thai hot peppers – locally called "donni' såli" or "boonie peppers" – are among the fruits that grow wild. Mango, taro root, breadfruit (locally called "Lemai"), and bananas are a few of the many foods cultivated by local families and farmers.

The island used to have a large population of giant African land snails, introduced either deliberately as a food source, or accidentally by shipping, which became an agricultural pest. In the last few decades, its numbers have been substantially controlled by an introduced flatworm, Platydemus manokwari. Unfortunately, possibly due to the flatworm, the native tree-snails also became extinct.

Saipan has a borderline tropical rainforest climate (Köppen Af)/tropical monsoon climate (Köppen Am), moderated by seasonal trade winds from the northeast from November to March, and easterly winds from May to October. Average year-round maximum temperature is 84 °F or 28.9 °C. There is little seasonal temperature variation, and Saipan has been cited by the Guinness Book of World Records as having the least fluctuating temperatures in the world. However, temperature is affected by elevation; hence the island shows considerable variations between the coastal and mountainous areas.

All content from Kiddle encyclopedia articles (including the article images and facts) can be freely used under Attribution-ShareAlike license, unless stated otherwise. Cite this article:
Saipan Facts for Kids. Kiddle Encyclopedia.