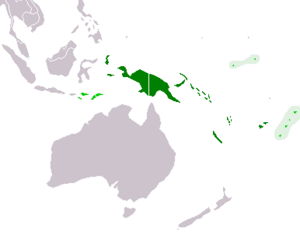 A map showing where Melanesia is. 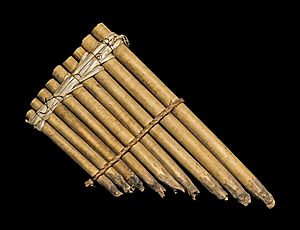 A pan flute from the Solomon Islands, 19th century

Melanesia is a region of islands in Oceania.

It stretches from the Western Side of the Eastern Pacific Ocean, to the Arafura Sea, northeast of Australia. Its name means "black islands".

following islands and groups of islands since the 19th century have been considered part of Melanesia:

Islands whose long-established inhabitants are of mixed ancestry who do not necessarily self-identify as Melanesian:

Some of the islands to the west of New Guinea such as Halmahera, Alor, and Pantar can also be considered to be part of Melanesia, although people in this area do not make use of the term. 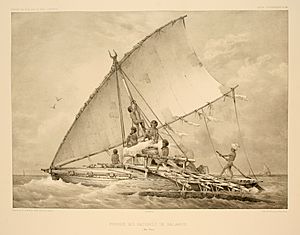 Sailors of Melanesia in the Pacific Ocean, 1846

The people of Melanesia have a distinctive ancestry. Along with the aboriginal inhabitants of Australia, the Southern Dispersal theory indicates they emigrated from Africa between 50,000 and 100,000 years ago and dispersed along the southern edge of Asia. The limit of this ancient migration was Sahul, the continent formed when Australia and New Guinea were united by a land bridge as a result of low sea levels. The first migration into Sahul came over 40,000 years ago. A further expansion into the eastern islands of Melanesia came much later, probably between 4000 B.C. and 3000 B.C. 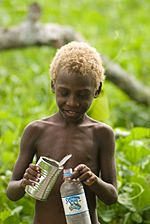 A Melanesian child from Vanuatu

Particularly along the north coast of New Guinea and in the islands north and east of New Guinea, the Austronesian people, who had migrated into the area somewhat more than 3,000 years ago, came into contact with these pre-existing populations of Papuan-speaking peoples. In the late 20th century, some scholars theorized a long period of interaction, which resulted in many complex changes in genetics, languages, and culture among the peoples. This Polynesian theory, however, is somewhat contradicted by the findings of a genetic study published by Temple University in 2008. It found that neither Polynesians nor Micronesians have much genetic relation to Melanesians. It appeared that, having developed their sailing outrigger canoes, the ancestors of the Polynesians migrated from East Asia, moved through the Melanesian area quickly on their way, and kept going to eastern areas, where they settled. They left little genetic evidence in Melanesia and "only intermixed to a very modest degree with the indigenous populations there". Nevertheless, the study still found a small Austronesian genetic signature (below 20%) in some of the Melanesian groups who speak Austronesian languages, and which was entirely absent in Papuan-speaking groups.

Most of the languages of Melanesia are members of the Austronesian or Papuan language families. By one count, there are 1,319 languages in Melanesia, scattered across a small amount of land. The proportion of 716 square kilometers per language is by far the most dense rate of languages in relation to land mass in the Earth, almost three times as dense as in Nigeria, a country famous for its high number of languages in a compact area.

In addition to the many indigenous languages, pidgins and creole languages have developed, often from trade and cultural interaction centuries before European encounter. Most notable among these are Tok Pisin and Hiri Motu in Papua New Guinea. They are now both considered distinct creole languages. Use of Tok Pisin is growing. It is sometimes learned as a first language, above all by multi-cultural families. Other creoles include Solomon Islands Pijin, Bislama, Papuan Malay and other related languages. 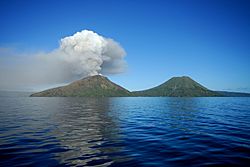 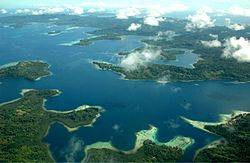 Aerial view of the Solomon Islands. 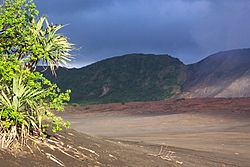 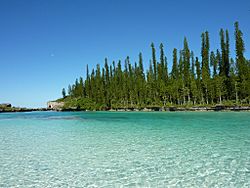 A distinction is often made between the islands of New Guinea and what is known as Island Melanesia, which consists of "the chain of archipelagos, islands, atolls, and reefs forming the outer bounds of the sheltered oval-shaped coral sea". This includes the Louisiade archipelago (part of Papua New Guinea), the Bismarck Archipelago (part of Papua New Guinea and Solomon Islands), and the Santa Cruz Islands (part of the country called Solomon Islands). The country of Vanuatu is composed of the New Hebrides island chain (and in the past 'New Hebrides' has also been the name of the political unit located on the islands). New Caledonia is composed of one large island and several smaller chains, including the Loyalty Islands. The nation of Fiji is composed of two main islands, Viti Levu and Vanua Levu, and smaller islands, including the Lau Islands.

The names of islands in Melanesia can be confusing: they have both indigenous and European names. National boundaries sometimes cut across archipelagos. The names of the political units in the region have changed over time, and sometimes have included geographical terms. For example, the island of Makira was once known as San Cristobal, the name given to it by Spanish explorers. It is in the country Solomon Islands, which is a nation-state and not a contiguous archipelago. The border of Papua New Guinea and Solomon Islands separates the island of Bougainville from nearby islands like Choiseul, although Bougainville is geographically part of the chain of islands that includes Choiseul and much of the Solomons.

In addition to the islands mentioned here, there are many smaller islands and atolls in Melanesia. These include

Norfolk Island, listed above, has archaeological evidence of East Polynesian rather than Melanesian settlement. Rotuma in Fiji has strong affinities culturally and ethnologically to Polynesia.

Melanesians were found to have a mysterious third archaic Homo species along with their Denisovan (3–4%) and Neanderthal (2%) ancestors in a genetic admixture with their otherwise modern Homo sapiens sapiens genomes. Their most common Y-chromosome haplogroup is M-P256.

The high occurrence of blond hair is due to a specific random mutation, so DNA and phenotype for blonds appeared at least twice in human history.

All content from Kiddle encyclopedia articles (including the article images and facts) can be freely used under Attribution-ShareAlike license, unless stated otherwise. Cite this article:
Melanesia Facts for Kids. Kiddle Encyclopedia.