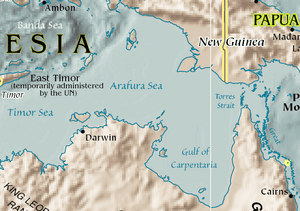 The Arafura Sea is west of the Pacific Ocean. It overlys the continental shelf between Australia and New Guinea.

The Arafura Sea is bordered by Torres Strait and through that the Coral Sea to the east, the Gulf of Carpentaria to the south, the Timor Sea to the west and the Banda and Ceram seas to the northwest. It is 1,290 kilometres (800 mi) long and 560 kilometres (350 mi) wide. The depth of the sea is mostly 50–80 metres (165–265 feet) with the depth increasing to the west. As a shallow tropical sea, its waters are the start for tropical cyclones.

The sea is over the Arafura Shelf, part of the Sahul Shelf. When sea levels were low during the last glacial maximum, the Arafura Shelf, the Gulf of Carpentaria and Torres Strait formed a large flat land bridge. The bridge connected Australia and New Guinea and let humans move from Asia into Australia. The combined landmass formed the continent of Sahul.

All content from Kiddle encyclopedia articles (including the article images and facts) can be freely used under Attribution-ShareAlike license, unless stated otherwise. Cite this article:
Arafura Sea Facts for Kids. Kiddle Encyclopedia.