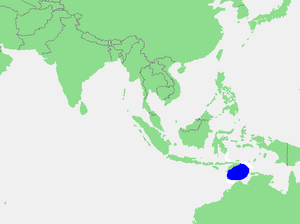 The Timor Sea is located in the eastern Indian Ocean

The Timor Sea is a relatively shallow sea. It is bounded to the north by the island of Timor, to the east by the Arafura Sea, to the south by Australia and to the west by the Indian Ocean.

The sea has a number of reefs, islands where no one lives and significant hydrocarbon reserves. The Timor Sea was hit by the worst oil spill for 25 years in 2009. 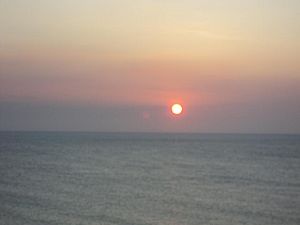 The waters to the east are known as the Arafura Sea. The Timor Sea is next to three large inlets on the north Australian coast, the Joseph Bonaparte Gulf, Beagle Gulf and the Van Diemen Gulf. The Australian city of Darwin is the only large city by the sea. The small town of Wyndham is on the west arm of Cambridge Gulf, an inlet of Joseph Bonaparte Gulf.

Rivers that enter the Timor Sea from the Northern Territory include Fish River, King River, Dry River, Victoria River and the Alligator Rivers. Rivers in the Kimberley region that flow into the Timor Sea include the Ord River, Forrest River, Pentecost River and Durack River.

In May 2010, it was said that a crater about 50 km wide has been found on the seabed of the Timor Sea. 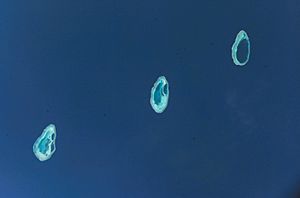 A number of important islands are in the sea. Two of the islands are Melville Island, part of the Tiwi Islands, off Australia and the Australian-governed Ashmore and Cartier Islands. It is thought that early humans reached Australia by "island-hopping" across the Timor Sea.

Scott and Seringapatam Reefs formed in the area. To the west on the same underwater platform is the Rowley Shoals.

All content from Kiddle encyclopedia articles (including the article images and facts) can be freely used under Attribution-ShareAlike license, unless stated otherwise. Cite this article:
Timor Sea Facts for Kids. Kiddle Encyclopedia.