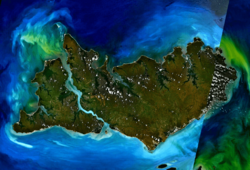 Landsat 7 image of the Tiwi Islands

The Tiwi Islands are a group of islands part of the Northern Territory, Australia. The islands are 80 km (50 mi) to the north of Darwin, split by the Timor Sea. The islands are Melville Island (Australia's third largest island), Bathurst Island, as well as nine smaller islands. The combined area of the Tiwi Islands is 8,320 square kilometres (3,212 sq mi). As of the 2016 census, 2,453 people lived on the islands.

The Tiwi people are indigenous to the islands.

All content from Kiddle encyclopedia articles (including the article images and facts) can be freely used under Attribution-ShareAlike license, unless stated otherwise. Cite this article:
Tiwi Islands Facts for Kids. Kiddle Encyclopedia.