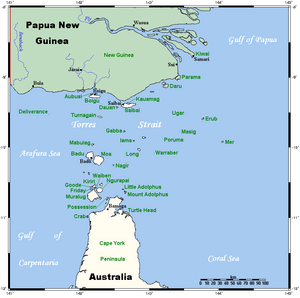 There are 6,000 Torres Strait Islanders who live in the area of the Torres Strait, and 42,000 others who live outside of this area, mostly in the north of Queensland, particularly in Townsville and Cairns.

The indigenous people of the Torres Strait have a distinct culture which has slight variants on the different islands where they live. They are a sea-faring people, and engaged in trade with peoples of Papua New Guinea. The culture is complex, with some Australian elements, some Papuan elements, and some Austronesian elements, just like the languages. The Islanders seem to have been the dominant culture for many centuries, and neighbouring Aboriginal and Papuan cultures show some Island influence in religious ceremonies and the like. Archaeological, linguistic and folk history evidence suggests that the core of Island culture is Austronesian. Unlike the indigenous peoples of mainland Australia, the islanders were traditionally agriculturalists although they supplemented their food supplies through hunting and gathering.

All content from Kiddle encyclopedia articles (including the article images and facts) can be freely used under Attribution-ShareAlike license, unless stated otherwise. Cite this article:
Torres Strait Islanders Facts for Kids. Kiddle Encyclopedia.