Kids Encyclopedia Facts
This page is about the Christian Bible. For the Hebrew one, see Hebrew Bible. 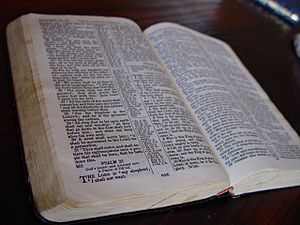 The Bible, also known as the Holy Bible, is a group of religious texts of Judaism or Christianity. The word Bible comes from the Greek word τὰ βιβλία (biblía) which means "books" in English, because it is many books in one book. It includes laws, stories, prayers, songs, and wise words. A number of texts are both in the Hebrew Bible, used by Jews, and this Christian one.

In considering the source and inspiration for the Bible one must see what the Bible says of itself. Several verses of scripture define the source, intent, and Author. 2 Peter 1:21 says this - "No prophecy was ever made by the act of human will, but men moved by the Holy Spirit spoke from God." Isaiah 55:11 tells us that His is a word of power - "So shall My word be that goes forth from My mouth; It shall not return to Me void, But it shall accomplish what I please, And it shall prosper in the thing for which I sent it." Hebrews 4:12 says this - "For the word of God is alive and active. Sharper than any double-edged sword, it penetrates even to dividing soul and spirit, joints and marrow; it judges the thoughts and attitudes of the heart."

When talking about the Bible, a book is used to speak about a number of texts. All the texts that make a book are believed to belong together. Most of the time, people believe they were written or collected by the same person. The Bible contains different kinds of such books. Some are history, telling the stories of the Jews, Jesus, or Jesus' followers. Some are collections of wise sayings. Some are God's commands to his people, which he expects them to obey. Some are songs of praise to God. Some are books of prophecy, messages from God that he gave through chosen people called prophets.

Different groups of Christians do not agree which texts should be included in the Bible. Christian Bibles range from the 66 books of the Protestant canon to 81 books in the Ethiopian Orthodox Bible. The oldest surviving Christian Bible is the Codex Sinaiticus, a Greek manuscript from the fourth century AD. The oldest complete Hebrew manuscripts date from the Middle Ages.

How it was written

For a long time the texts were passed on by word of mouth from generation to generation. The Bible was written long ago in Aramaic, Hebrew, and Greek. Translations were made later into Latin and some other languages. Now there are translations in English and many other languages. The books of the Hebrew Bible—what Christians call the Old Testament—were not all written at the same time. It took hundreds of years (about 1200 years). The process of putting it all together began around 400 B.C. The books of the New Testament, which was originally written in Greek, began to be collected together in about 100 A.D. It tells about events that happened between 4 B.C. and 70 A.D. These events included the birth, life, death and resurrection of Jesus. It also tells how his followers went around spreading his message. It ends with a description of how the world will end when Jesus returns to earth. Most of the writers of the New Testament were apostles of Jesus. These were people who said they had seen Jesus alive after his crucifixion.

A translation is when a scribe takes the source in one language and writes it in another language. Most texts of the Bible were written in Ancient Greek or in Aramaic or Hebrew.

The first to provide a translation into Latin was Jerome, in the 5th century. He started what is known as the Vulgate today. Wufila translated the Bible into the Gothic language. In the early Middle Ages, people such as Petrus Valdes, and Jan Hus provided translations.

The New Testament was first translated into English in 1382 by John Wycliffe, and his associates translated the Old Testament. The translation was made from the Vulgate Latin bible. Wycliffe did this so that people could see for themselves what the Bible said. The translation was completed in 1382. There were some later editions by other people to the Wycliffe bible, as it is called. It was translated into Middle English, the language of his day. Wycliffe did not have Church permission to do this, but he was protected by John of Gaunt, one of the most powerful men in the kingdom. After both Wycliffe and his protector were dead, the Church declared Wycliffe a heretic in 1415, and banned his writings. The Council of Constance decreed Wycliffe's works should be burned and his remains exhumed (dug up). Why was the Church so opposed? The translations challenged the Church's authority over the people. In church, explaining the Bible was the priest's work. Whatever he said could not be challenged. Once the ordinary people could read the Bible, they might have other opinions.

The next step in translation was done in 1525 by William Tyndale. His translation was into Early Modern English, which we can just about understand today. Tyndale also did it without Church permission. His was the first translation to be printed, and several thousand copies were made. He had no protector, and his fate was terrible. He fled to Europe, but the agents of Thomas More (Chancellor of England at the time) eventually found him. Both Tyndale and his printer were executed by burning at the stake.

Some texts were written by historians who tried to show what Ancient Israel was like. Other texts are poems about God and his work. And others were used to make laws. Followers of Judaism and Christianity consider the Bible sacred but they do not all agree about what belongs in the Bible. What is considered part of the Bible changed with history. Different denominations include certain parts or leave out other parts. There is not one single version of the Bible; both the content of the books and their order may change.

Languages do not match. When a translation is done, the translator has to decide between translation word for word, or capturing the sense of the text. When he decides to capture the sense, he will choose other words in the target language. This is called paraphrasing.

Today there are dozens of versions of the Bible. Some are translations and some are paraphrases. A paraphrased version is where people take a translation and put it in their own words. As the Bible has been translated into modern languages, it is also possible that there are different translations of the same texts. The Bible is the best selling book of all time. 2.5 billion to more than 6 billion copies of the Bible have been sold to date. A complete version of the Bible exists in 471 languages. Parts have been translated in 2225 languages. Most Bibles can be found in the British Museum in London.

The Christian Bible is a collection of 66 books. The first 39 books are the Old Testament. It is the first part of the God's story of salvation. "Salvation" is God's long work of saving us from our sins. "Sin" is what happened when people decided to live their own way instead of God's way in the world that God created. That was when God began His great work of saving us from our sins. To prepare the way, God had to destroy the whole world by a great flood, except for the family of Noah. Then God raised up a new people for Himself. They were the ancient Hebrews. God promised the Hebrews they would bring His salvation to the whole world. The first five books of the Old Testament are mostly the story of how God chose the ancient Hebrews and taught them his laws. Following these are the twelve books that tell the history of the Hebrews. The next five are books of poetry and wisdom. One of these five books, the "Psalms", is a book of songs showing mainly how God wants to be worshiped. The last seventeen books of the Old Testament were written by Hebrew prophets. These books tell about God's disappointment with the ancient Hebrews and His promise to bring them back to friendship with Him. The prophets also foretell a great surprise God was planning for the world-He was going to send His very own Son, the Messiah (the "Anointed One"), the Saviour, to save us from our sins. You can read about this Messiah in the New Testament. In the Old Testament, Tanakh was mostly written in Hebrew; a few parts were written in Aramaic. This part of the Bible is considered to be holy by Jews as well as Christians.

There are also a few books of the Old Testament's time called Deuterocanonical by those Churches that accept them as part of the Bible, and Apocrypha by those that do not.

The second part is called the New Testament. The main part of this book is the story of the life of Jesus Christ. The four different versions of this story in the New Testament are called the Gospels. After the Gospels, there is also the story of what happened to the Church after Jesus's death and resurrection. Part of this is told through letters by early Christian leaders, especially Saint Paul. The final book of the Bible tells about a vision that St. John, one of the disciples of Jesus, had. In the vision John saw what would happen at the end of the world. This included judgement for evil and happiness for the people who had followed Jesus. One of the most quoted verses in the Bible is John 3:16: "For God so loved the world that He gave His one and only Son, that whoever believes in Him shall not perish [die] but have eternal life." NIV

Views about the Bible

According to Islam, the Injil itself is to be followed but it is believed to have been corrupted with time. The Qur'an is believed to be the successor.

Atheists do not believe that gods exist, so the Bible is only an ancient book.

Deists believe in God, but they believe that the Bible was written by people, so they don't see it as important.

Some people in the Bible

All content from Kiddle encyclopedia articles (including the article images and facts) can be freely used under Attribution-ShareAlike license, unless stated otherwise. Cite this article:
Bible Facts for Kids. Kiddle Encyclopedia.